Chris Jordan is convinced England’s heartbreaking defeat in the last T20 World Cup final helped them become a calmer, wiser side as they try to recapture the trophy five years later.

When Jordan delivered the penultimate over of the 2016 tournament at Eden Gardens, it looked to have all-but sealed a second T20 World Cup triumph for Eoin Morgan’s men.

The West Indies needed 27 runs off the last 12 balls and Jordan held his nerve to cough up just eight from his six deliveries.

What happened next is for the history books, with Carlos Brathwaite launching Ben Stokes for four consecutive sixes to seal a dramatic victory against the odds.

Stokes remains on an indefinite break from the game but seven of the shellshocked England XI from that night in Kolkata are part of the squad that will open their 2021 campaign against the Windies on October 23 and their previous meeting in the competition is sure to loom large over proceedings.

Jordan, recalling events from the team’s training base in Oman said: “I bowled my last over under what was quite immense pressure and when I bowled a dot ball on that final ball, it definitely did feel a lot closer than it ended up.

“That’s part of the learning, part of having that experience, because having that feeling after that ball… I’ll never take myself to that place ever again. I definitely won’t be thinking that way after bowling the 19th over until it’s fully, fully over.

I bowled my last over under what was quite immense pressure and when I bowled a dot ball on that final ball, it definitely did feel a lot closer than it ended up. I’ll never take myself to that place ever again…until it’s fully, fully over.

“It’s funny, we tend to have a laugh about it now. But we definitely came out stronger for it as a unit and as a team.

“I wouldn’t say it really haunted us too much, that’s part of sport, that’s part of life. Someone has to come up victorious and for something like that to be done in the last over, you can’t really write that.”

Jordan suggested England, who went on to win the 50-over World Cup in 2019, made a conscious decision not to get hurried along in the frantic finishes that short-form cricket can frequently throw up and now have the cool heads they need to prevail.

“One of the things that sticks out to me is how quickly that last over went. I remember going into a few games after that and, when we did get in those situations, we just started to slow the game down a bit more so our decision making was much clearer,” he said.

“Then you saw that going into the 2019 World Cup. The team was on autopilot really, in any situation you just saw the game started to slow down a little bit and everyone came up with an informed and correct decision.

“For this team, having been together for so long, the chemistry is there, the talent is there. All the ingredients are there for us to make a decent run in this campaign as well.”

While Jordan has played Tests and ODIs for England, he has increasingly been used as a 20-over specialist in recent years.

“It is a role he has embraced, to the point that he is their third-most capped player in the format, behind skipper Eoin Morgan and Jos Buttler, and the record wicket-taker with 73. 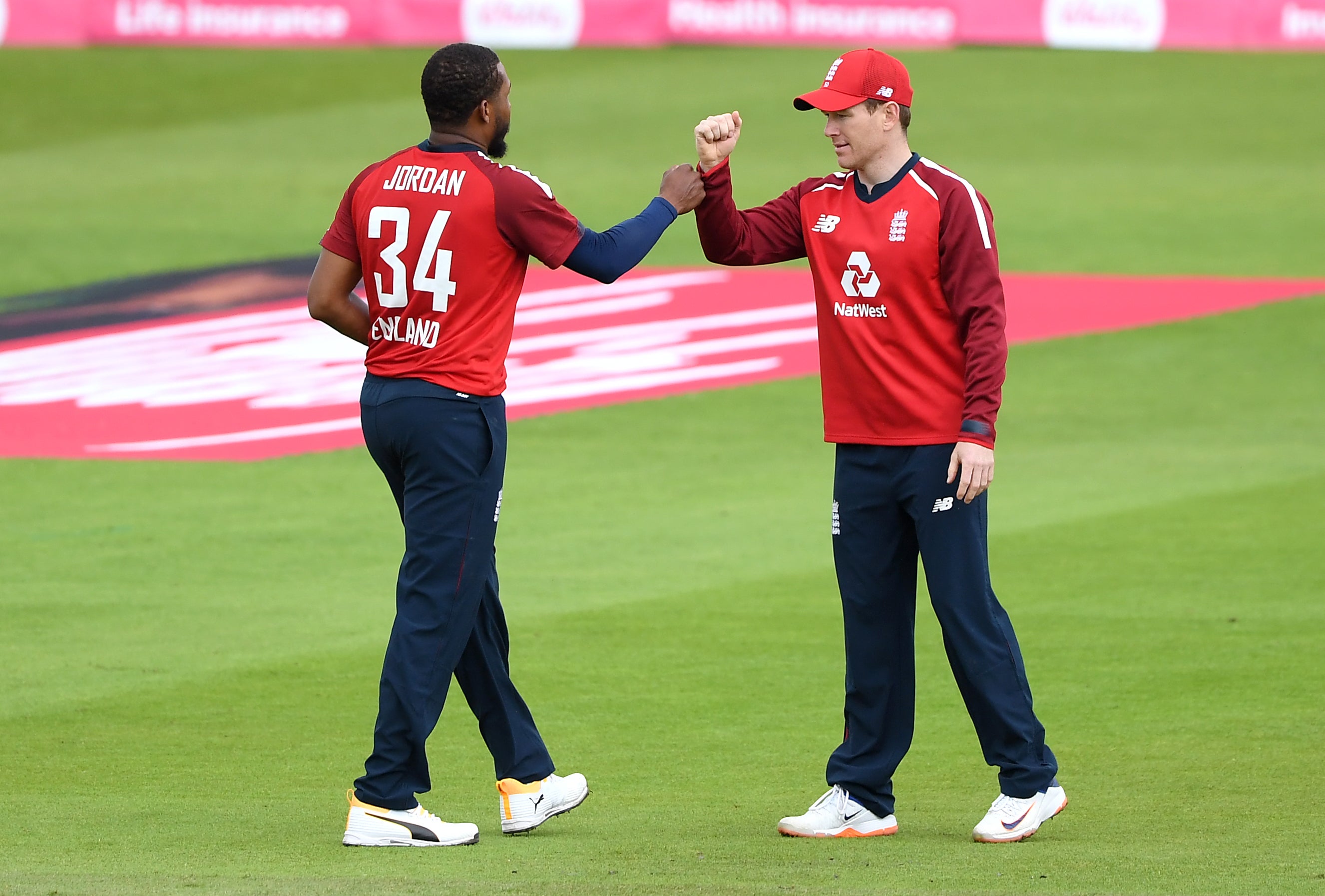 When Morgan wants advice from his seamers, it is Jordan he seeks out more often than not.

“I guess that’s something that I’ve sort of transitioned into, given that I have had the privilege of seeing so many different surfaces and experiencing quite a few different things,” he explained.

“I try to just quickly get a read on the pitch, on conditions and on the opposition. I try to bounce my ideas as much as possible at Morgy.

“Obviously he is a very experienced captain and has seen even more than I have but just to be there as another ear, another voice is something that I really enjoy.”