Warrnambool Racing Club will host 300 racegoers on Thursday as part of Victoria’s vaccine economy trial, as the state begins to reopen major events for the fully vaccinated.

New QR technology, which will prove a patron’s vaccine status, will be trialled on entry as part of the minor country race day, with feedback to be provided to the government ahead of Melbourne Cup Day. 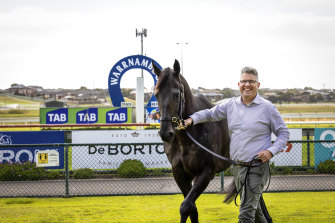 The Melbourne Cup is part of the same trial, but on a much larger scale. Flemington will welcome 10,000 people to what VRC chairman Neil Wilson has dubbed “the race that starts a nation”.

Should Victoria hit the 80 per cent double-vaccination threshold before Oaks day, then 10,000 patrons will also be allowed on course for the final two days of the Melbourne Cup carnival.

Country Racing Victoria had been in talks with the government, offering up a number of race days to be used for the trial.

But the government has taken no risks, overlooking some of racing’s larger country cups for a smaller race day at Warrnambool where the remote city has embraced the vaccine.

“Obviously they put out fairly early on there were a couple of local government areas with high vaccination rates that they were targeting and Warrnambool fitted that bill, and there were also designated industries that were also earmarked and one of them was racing,” the club’s chief executive Tom O’Connor said.

“We ticked both those boxes, so we reached out to Country Racing Victoria, who were doing a bit of correspondence on it all, and we got the tick of approval.”

Thursday’s meeting will be open only to members and owners who live regionally and are fully vaccinated, or are medically exempt from getting vaccinated. They will be required to prove their vaccination status using the new Services Victoria app, which is linked to Medicare.

Warrnambool hosted crowds at its three-day May carnival, where it was permitted to welcome as many as 12,000 on course to each of the three days. 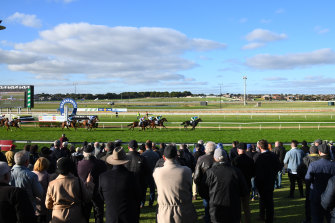 This Thursday, the 300 racegoers will be restricted to outdoor dining, but patrons will be able to access amenities inside. They will be kept separate from the industry participants.

“We’re reasonably fortunate that we’ve got reasonable facilities to cater for that, but it will be an outdoor crowd as far as the on-course patrons go,” O’Connor said.

O’Connor said the club was looking forward to playing its part in Victoria’s return to opening up.

“It’s very much about a trial on Thursday. It’s not necessarily about what a normal race day experience would be,” he said.

“It’s about trialling the new systems to give feedback to the government on how those systems work, to obviously enable things to open up into early November.”

“Part of the process is gathering and recording information on how they do that, how well they do it, if they’re able to do it.

“This trial period is certainly about recording and gathering that information so obviously when these systems become part of our normal life in the short term, it’s about fine-tuning the systems to make sure when all the pubs and clubs and other events open up, it’s pretty seamless as far as entry goes.”