Australia’s cricketers stand to share in a windfall worth about $70 million at the end of the pay deal formally extended on Thursday, although a Cricket Australia revenue downturn means the pot is not as golden as it might have been.

Significantly, the one-year extension has also taken the scheduling shackles off the women’s game after its transition to professionalism, removing limits on the number of domestic matches that may be played and raising payments accordingly. 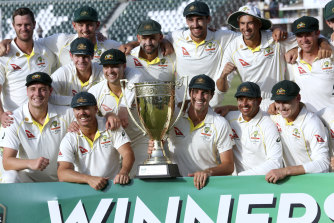 Not only does that mean the 50-over national league will be expanded to a full home-and-away season this year, but there will now be allowance for women to play domestic red-ball matches and no longer be restricted to one Test match a year.

The adjustment ledger money, customarily handed over to all current and recently retired players at the end of a memorandum of understanding cycle, was a central battleground of the bitter dispute between CA and the Australian Cricketers Association five years ago.

Back then, it was worth some $58 million and paid out in October 2017. This time around, as part of the first memorandum to include both male and female players, the valuation of about $70 million reflects the players’ 27.5 per cent share of extra revenue raised after the signing of the $1.2 billion broadcast deal with Foxtel and Seven in April 2018.

Originally, it was thought that the pot of money in the adjustment ledger might have grown to as much as $110 million over the term of the memorandum, but the percentage deal flexed as designed during the past two years of COVID-19 to reduce the players’ cut.

“For the first three years there was really good upside that went into the adjustment ledger,” ACA chief Todd Greenberg told The Age and The Sydney Morning Herald. “The last two years with COVID didn’t hit the high points because revenues fell and we didn’t sell tickets to games.

“That’s where the model works and has been acknowledged by both CA and us, that it’s self-adjusting and there’d be a lot of sports who would make life a lot easier if you could self-adjust their model with the players.”

The extension agreed this week, after a request from CA’s chief executive Nick Hockley to his counterpart Greenberg last year, features one major change to raise the number of domestic games allowed to be played by women.

As a consequence, the 50-over women’s national cricket league will expand to a full home-and-away competition this season, played after the WBBL, with all teams playing 12 games before the finals.

That will mean additional match payments of around $7000 for every player, and a rise in average remuneration for female domestic cricketers to around $86,000 a year – provided they play both WNCL and WBBL.

“We thought that was a really important component of the evolution of the pathway for our female cricketers,” Greenberg said. “Everyone talks about the success we’re having at the top of the pyramid, but that’s only brought about through long-term investment through the base of the pyramid, and that’s the WNCL.”