Australia through to semis after Warner punishes Windies in big win

David Warner showed he is not a spent force as Australia powered its way into the Twenty20 World Cup finals with a dominant defeat of the West Indies.

As the Caribbean side farewelled two legends, Aaron Finch’s men cantered home by eight wickets with 22 balls to spare to stay in second place on the table in their group.

But confirmation of a semi-final berth only came later as South Africa dispatched England by 10 runs in the early hours of Sunday morning (AEDT).

The Australian game marked the end of an era for the Windies, with Chris Gayle strongly indicating he was joining fellow two-time T20 World Cup winner Dwayne Bravo in international retirement. Dismissed for 15 off nine balls by Pat Cummins, the man dubbed the Universe Boss raised his bat to a sparse crowd in Abu Dhabi as he left the field, and received a standing ovation from his teammates.

Brought into the attack with the game sealed, Gayle dismissed Mitch Marsh with what is expected to be the final ball of his international career, celebrating the milestone by chasing down the pavilion-bound all-rounder to give him a playful hug.

He joined Bravo in leaving the field to a guard of honour from both sides, though there was no confirmation of his retirement from Gayle or the Windies at the time of publication. 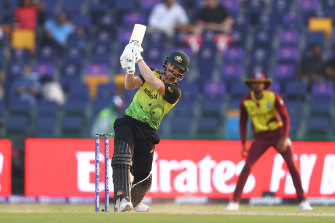 The concerned expressions in the Australian camp early in the game turned to smiles a considerable way out from the end thanks to a bruising knock by Warner, who turned back the clock with an unbeaten 89 off 56 balls.

After a lean run in the Indian Premier League, the opener has now cracked two half-centuries from his past four innings in a strong sign the 35-year-old still has much to give on the world stage.

Lacking fluency earlier in the tournament, Warner has rediscovered the confidence and aggression which has made him such an imposing player.

He and Marsh added 124 runs for the second wicket against a Windies attack which, with the exception of left-arm finger-spinner Akeal Hosein, lacked bite on a batter-friendly track. 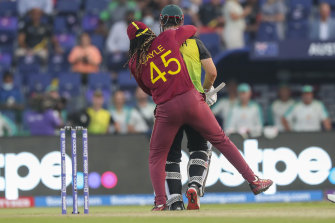 Chris Gayle gave Mitch Marsh a hug on his way off the field.Credit:AP

Dropped for the rout against England for spin-bowling all-rounder Ashton Agar, Marsh made 53 off 32 balls to complete a fine double after earlier recording 0/16 from his three overs.

As serviceable as Agar was, Australia is stronger with Marsh in the XI as a big-hitting Number 3 who can contribute invaluable overs with his seamers.

“I’m seeing a very clear-minded cricketer,” Warner said of Marsh, who has become a whipping boy for many Australian fans.

“A lot of people were knocking him. It’s not our fault sometimes you get selected in teams, and you try your best every time. His form has been outstanding, he’s hit the ball as clean as anyone in this team, and you can see it happening on the field. It’s fantastic, and I’m really pumped for him. It’s great for our team.”

This was an impressive performance by the Australians, who rebounded strongly after a shaky start with the ball and caught well.

“All in all, we’re hitting momentum at the right stage of the tournament,” Warner said.

The Windies bolted out of the gates with 35 runs from the first three overs, but the run-rate turned south after Finch backed in Josh Hazlewood by giving the giant quick a second over with the new ball after he had conceded 20 in his first.

He was rewarded with the wickets of Nicholas Pooran and Roston Chase, which hobbled the innings. Needing to consolidate, the Windies skewed perhaps too far on the conservative side in the middle stages, limited to just 49 runs in the nine overs after the power play.

Hazlewood claimed the figures of 4/39 and though he conceded nearly 10 an over his wickets were crucial.

The Windies’ reluctance to take the game on enabled Glenn Maxwell and Marsh to concede just 22 overs from their four overs – an excellent return from Australia’s fifth and sixth bowling options.

Leg-spinner Adam Zampa, the leading wicket-taker in the Super 12s, continued his excellent campaign, pinning the Windies with his ability to turn the ball both ways. He finished with a miserly 1/20 from his four overs.

The Windies did not put their pedal to the metal until the 17th over when Kieron Pollard belatedly opened his shoulders. They creamed 48 from the final four overs against Mitchell Starc, Pat Cummins and Hazlewood but should have accelerated earlier.

The decision to bat Andre Russell at eight was curious, limiting the powerful hitter to face just the seven balls. Adding to the sense the Windies left too much in the tank, Russell, who made an unbeaten 18, hit the last two balls of the innings for six.

Then all eyes turned to the game between South Africa and England with the Proteas needing a massive win to unseat the Australians from the semi-finals.

Instead the South African posted 189/2 from their twenty overs built around unbeaten knocks from Rassie van der Dussen (94) and Aiden Markam (52).

Despite holding England’s chase to 179/8 off their allotted overs, the win did not boost South Africa’s run-rate to claim Australia’s spot.

The finals draw will not be confirmed before the results of final round-robin matches are played but Australia is tipped to face Pakistan in its semi-final.