Home » Sports News » Australia ready to be the ‘centre of attention’: Lanning

Australia ready to be the ‘centre of attention’: Lanning

As a Sydney Swans supporter, Australian captain Meg Lanning has experienced the exhilaration of a packed MCG but never as a central character. That's about to change, for the grand colosseum could play host to a record crowd for a stand-alone women's sporting event on Sunday when Australia take on India in the women's Twenty20 World Cup final.

Organisers now hope to topple the 90,185 that attended the 1999 soccer World Cup final in Los Angeles, and Lanning said this buzz would be a spur for her team as it seeks a fifth T20 World Cup but first on home shores.

"I have been to quite a few grand finals and Boxing Day (Tests). Unfortunately, I have only been to losing Swans' grand finals," Lanning told The Age and Sydney Morning Herald on Friday. 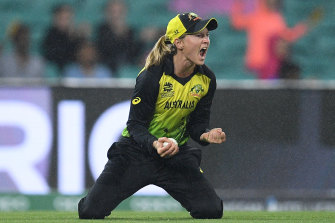 "The atmosphere is incredible, and when the anthem finishes, the big raw from the crowd. Just being in stands is amazing. To think we will be in the middle of that and the centre of attention is going to be something that will be pretty amazing to be a part of."

Lanning, of course, has played at the MCG in internationals and in the Women's Big Bash League but the support this time will be far greater.

"When there is a big crowd in there, the atmosphere is incredible … the thought of it is just really exciting and something that we always hoped we would be a part of. To know that we are actually there now is certainly a special feeling," she said.

There had been a time through this World Cup when Australia were vulnerable and had looked in doubt to make the play off. The defending champions lost to India in the opening round in Sydney but have slowly found form. There have been setbacks – injuries to strike bowler Tayla Vlaeminck and superstar allrounder Ellyse Perry initially rocked the group – but Lanning's team has refused to be fazed.

There was also the uncertainty of even getting onto a sodden SCG on Thursday night and the fear their hopes of back-to-back titles would be dashed by a washout. That, however, did not come to fruition, with Lanning central to an eventual five-run win with an authoritative and unbeaten 49 against South Africa. Organisers could rest easy – the Australians, and pop singer Katy Perry, would be an item on the tournament's showcase day.

"We have had to adapt a lot throughout this tournament. Our plans coming into this tournament have totally changed given the personnel we have got, but just because we have different plans, it doesn't mean they are not going to work."

The superstar batter knows all about winning, for she is taking aim at her fifth World Cup title across the one-day international and Twenty20 formats. However, this one will be different. She remembers when Michael Clarke and the Australian men's team claimed the 2015 World Cup with a crushing victory over New Zealand at the MCG. Now is her chance to taste similar success.

"No doubt, it has been different in a really good way. There has been so much interest and want for us to do well," Lanning said of a home World Cup that has taken in stops in Sydney, Perth, Canberra and Melbourne.

"There has been scrutiny, good and bad, which is what we have wanted. It shows where the sport is and that people want it do really well."

The messages of support have come from family and friends but none yet from the prime minister, although that could change come Sunday.

"It has been the most talked about, the most busy, hectic World Cup I have been a part of. It has all been worth it so far and we have given ourselves an opportunity," she said.

"It could be a once-in-a-career opportunity for me to lead the team here and for everyone to play in a home World Cup. We have spoken a lot about enjoying that chance and embracing it. We have been able to do that, especially in the last week or so.

"I think the first half of the tournament was pretty hectic. We took a while to settle down into the tournament but I feel like we have really been pretty calm in the last week or so."