Australian duo Ellyse Perry and Darcie Brown put their side in a strong position on day two of the women’s Ashes Test after declaring at 9-337 on Friday morning.

England were 3-66 shortly after the resumption following the lunch break.

Earlier, the declaration for Australia came after England pace bowler Katherine Brunt took five wickets for the third time in her career to finish with figures of 5-60. 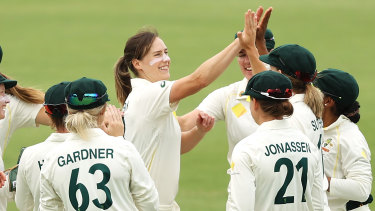 Ellyse Perry was dropped from Australia’s T20 matches but has already found a wicket in day two of the Test. Credit:Getty

Nat Sciver also played an important role for England on Thursday after taking the key wicket of Meg Lanning for 93 to end her 169-run fourth-wicket stand with vice-captain Rachael Haynes.

Brunt was quick to praise Australia for the quality of Manuka Oval after the five-wicket haul.

“There’s lots of action, lots of things to work with, swing, seam, a bit of bounce, carry which is unheard of, it just makes for a brilliant game of cricket,” Brunt said about the conditions. 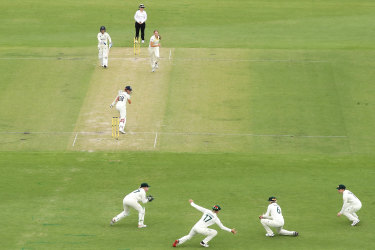 Gone: Beth Mooney takes the catch for the wicket of Lauren Winfield-Hill at Manuka Oval.Credit:Getty

“It’s brilliant to be part of this and put on entertainment for everyone.”

Friday morning’s session saw Australia bat for just 28 minutes and ten runs before declaring raising questions as to why the hosts did not declare overnight.

But Australia’s bowlers were quick to get things rolling on day two with Perry and Brown taking early wickets with England heading into lunch 38 for 2, trailing by 299 runs.

Perry managed to take the important wicket of Tammy Beaumont in the morning session which marks the all-rounder 301st international wicket across all formats.

Alana King also bowled her first Test over ahead of the lunch break with the debutant quick to prove her worth.

The 337 runs bode well historical for Australia with no team ever having lost a women’s Test match after scoring 300 runs in the first innings.