The rain might have slipped back into the equation, but not the appetite of stables from all points of the compass as a near record number of non-carnival runners line up for a bumper feature meeting at Port Macquarie today.

On a wide open nine-race card, another Heat of the Rising Star series over 1500-metre takes centre stage at benchmark 66 level, and a popular local win is looming. 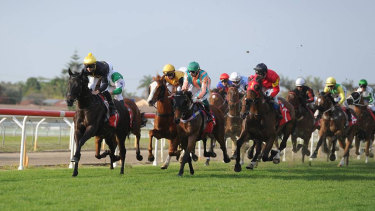 Raqcing returns to Port Macquarie with a nine-race card on Thursday.

Improving four-year-old home track gelding Acoustix from the Tas Morton stable, and already with a 25 per cent win and 50 per cent place strike-rate from just 16 starts, looks set to return to the winner's stall under new rider Jenny Duggan.

Acoustix scored impressively at Taree this grade three runs back before repeating the dose in a Class 3 here, then did his best work late in the Mid North Coast Country Championship qualifier behind Magnalane.

That form reads well for this, and despite a sharp jump up to 60.5kg, Acoustix looks tuned up for today's feature, although in smart Newcastle mare Tigeen who won first-up in this class; Grafton 'mudlark' Real Gent who has never been beaten in four starts on heavy tracks; and lightly-raced Coffs Harbour gelding Northern Knight, the opposition is more than genuine.

After that race, a strong Class 3 Hcp over 1800 metres pits some very capable middle distance gallopers many coming in with solid metro Highway form.

Smart Taree gelding Senatorial charged home to win two straight before going under narrowly in a bold Highway effort in similar soft ground at Randwick, and up just 1.5kg from that run and drawn the inside, he looks a serious chance.

So too does the Tuncurry "tornado" Up The Stairs, despite drawing wide, who comes out of that same Highway when right on Senatorial's heels; while progressive Newcastle gelding Into The Oblivion looks well prepared to take the next step up dropping 5.5kg from a dominant Class 1 win in heavy ground at Taree.

Earlier on the program, the Kris Lees yard at Newcastle will likely saddle up one of the shortest-priced favourites in the region for some time, with promising three-year-old gelding Captain Solo set to break through in a modest Maiden Plate (1200m) as the hottest of fancies.