Football Federation Australia chief executive James Johnson has urged A-League clubs to start making the most of their hard-fought independence and empower Greg O'Rourke to lead the competition out of the darkness.

Johnson delivered the comments at Thursday's meeting of club owners in Sydney, according to sources with knowledge of what was discussed at the day-long summit. 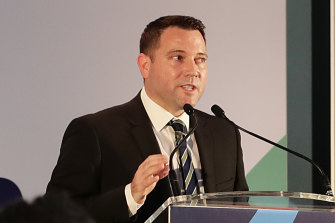 Johnson also encouraged A-League chairmen to more clearly define the role of O'Rourke – FFA's head of leagues, and the de facto CEO of the competition – and give him more scope to act as a voice for the domestic game.

The address from Johnson, who has been in the top job at FFA for just over a month, was not antagonistic unlike the many exchanges between the governing body and the clubs during the Lowy-Gallop era, according to the sources, who described his comments as a more conciliatory call to action that came with the support of FFA. It was received well by the clubs.

This season is the first since the A-League's separation from FFA – the fruits of a years-long war within the sport. The split has been operationally finalised but won't be legally signed off until the end of the current broadcast deal in 2023.

The circumstances have left the competition burdened with a sense of inertia. Club sources have spoken regularly of confusion as to where certain responsibilities lie, and the hesitancy has led to a failure to sell a unified message or vision to supporters against a backdrop of declining television ratings, crowds and sponsorships.

O'Rourke, meanwhile, has been working as the head of a business unit within FFA but reports not to a singular chairman or board, but all 12 club owners at once, with no real mandate to serve as the A-League's figurehead.

That will soon change, with the clubs resolving to finalise the structures around O'Rourke, back him in and get on with the business of improving the A-League, sources said.

The A-League's high-profile advisor, former English Premier League mastermind Richard Scudamore, was also at Thursday's owners meeting. He is on his second trip to Australia after signing on as a sounding board to the clubs and O’Rourke in October.

Scudamore conceded certain elements about the A-League were still in a "halfway house" because it is still legally tethered to FFA.

"That was a big part of what we were discussing over the last couple of days," Scudamore told the Herald when asked about who was responsible for the A-League's public leadership. 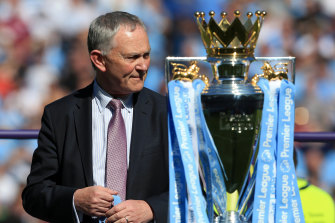 "They're feeling their way towards governance, how they're going to run things. The easy stuff is the fixtures, the running of the league, the operational stuff.

"When it comes into the slightly more challenging stuff – the commercial stuff, the PR, the [communications], they're managing their way through all that. That's still in a halfway house but that's [okay].

In an earlier interview with the Herald, Johnson made it clear the A-League was no longer the domain of FFA.

"The day-to-day operations, we're not involved," Johnson said. "Defining where the league wants to go and the strategy, this is a job the league has to do, and we'll support that, provided there is alignment with the direction we want to go as a whole of game."

At Friday's Sydney FC business luncheon at The Star, club chairman Scott Barlow spoke of a "clear strategy" for the direction of the A-League. It's yet to be publicly unveiled, and Scudamore said that's because the work behind it was still ongoing.

"As part of the strategy, they have to communicate what is going on. But you can't expect people to clearly communicate exactly what is going on until they've worked out the answer to that question themselves," Scudamore said."They're trying to describe the destination point, they've all got their views – that's what they're working on. People are putting in significant hours and resources to answer that question and only when they've got something they're able to tell with some certainty do I think that it's right that they should go out there and say something."