‘We have a huge opportunity’: A-Leagues finalises $140m equity sale

Marquee players, an expanded A-League Women’s season, the return of youth football and a greater investment in digital, marketing and community programs are all on the agenda for the A-Leagues after a deal to sell one third of the competition to an American private equity firm for nearly $140 million was finalised.

As first revealed by The Herald in October, the A-Leagues struck an agreement to sell a 33 percent stake in the competition to Silver Lake, sealing the largest single injection of capital into Australian football in the game’s history. The sum values the entire A-Leagues organisation at $425 million.

The deal was formally ratified over the weekend after gaining approval from the federal government’s Foreign Investment Review Board and has been hailed as a potential game-changer for a sport that has historically struggled to attract funding and investment.

Now, the A-Leagues will bank an amount which represents one of the biggest cash reserves of any competition in Australian sport, and which it is hoped will underpin the future growth of the game.

The league has already marked “about eight” areas for investment over the next few years, according to managing director Danny Townsend, but will make its new digital footprint among the priorities. The league recently launched its own app and content platform, Keep Up, which will be expanded with the funding from the equity sale to increase the promotion and coverage of the game.

“We have been out ahead of this investment. The APL board backed the strategy back in June, July when we needed to change things up and, really, we are ahead of the capital raise,” Townsend said. 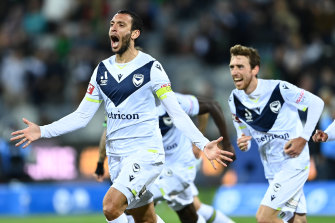 The A-League has landed a $140 million pay day with an equity sale to Silver Lake. Credit:Getty Images

“We also have continued investment in really developing the phase two part of our Keep Up strategy and developing a better customer experience for our fans. Also then connecting that down to community football. We have really clear and exciting ambition there to really deliver a better experience for the broader football community in Australia.”

The A-Leagues won’t be rushing to spend their windfall but will seek to use the funds to build the long-term financially stability of the competition. They have flagged investing to improve the quality of football on offer with the addition of high-profile stars and players from countries with significant expatriate communities in Australia.

“It’s not just about marquees, it’s about the different stakeholder groups that love our game,” Townsend said. “We are so connected to Asia, so how do we bring more Asian footballers of notoriety into our game? How do we look at other nationalities of huge migrant populations that live here in Australia and connect our sport to them knowing they are typically coming from football-first countries? It’s about the big names, it’s about the other nationalities and cultures.”

Officials have also signalled their intention to invest more heavily in the A-League women’s competition, potentially funding its expansion to a full home and away format in the future as well as reintroducing a proper men’s youth league to address the issue of player development in Australia.

“There’s not one single part of the strategy that is going to stand out,” Townsend said. “You can’t change the code in this country with one specific move. Everything we are doing is a system of multiple different strategies to come together and deliver multiple different outcomes.”

The A-League Men is seeking to expand to 14 teams within the next two years and is hopeful the equity sale will help attract potential new owners with the financial clout to invest heavily into the sport.

“We have a huge opportunity ahead of us and we want the right partners to develop that with us. Expansion is a part of that,” Townsend said. “Our timelines of expansion, we have made public before, is on the short to medium term agenda.”