Clubs in the Championship have the freedom of choice over whether to take the knee before kick-off and it’s been that way for some time now.

By the end of the night, it was the home side who’d showed why they deserve to be considered among the promotion favourites thanks to Joao Pedro’s winner from a lightning counter-attack. 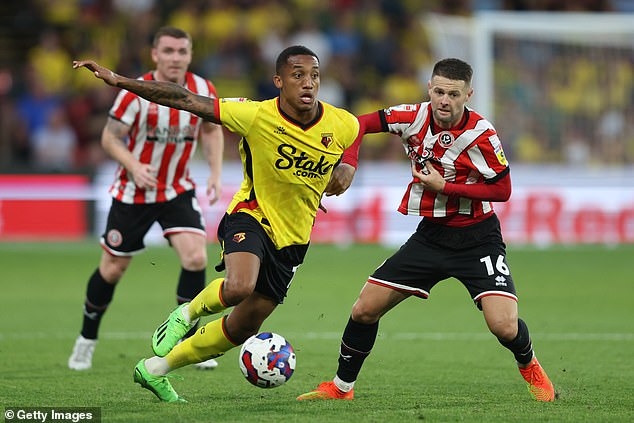 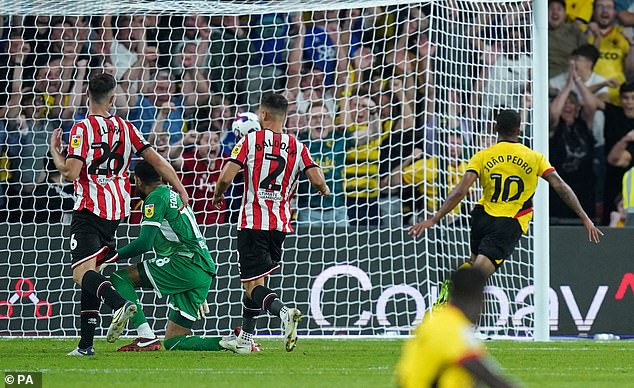 The 56th-minute breakthrough stemmed from a Blades corner. John Fleck’s shot was blocked after referee Josh Smith almost got in the way and ricocheted out to Hassane Kamara.

With yellow shirts streaming forward, his cross-field pass initially looked inadequate but somehow made it out to Ismaila Sarr on the right via Emmanuel Dennis.

All Sarr had to do was square for Pedro in the middle to sweep home with the United defence left flat-footed as they chased back from their own set-piece in vain.

Watford deserved the three points. Back in the second-tier after another failed campaign in the Premier League, they’d been through another summer of upheaval.

But even though many established names departed, they retain an attack that looks a step above much of this division.

Whether Sarr and Dennis, on the market for a combined £50million, remain beyond deadline day remains to be seen, but Watford will make full use of them while they’re here.

Edwards, 39, was given a warm hand by Vicarage Road before kick-off. He opted to put summer arrivals Rey Manaj and Vakoun Bayo among the substitutes, while a more recent signing from Villarreal, Mario Gaspar, lacked the fitness levels to make the squad.

The Hornets carved out the first opportunity as Dennis and Sarr connected down the left. Dennis side-footed a through pass into Sarr, who fired into the side netting.

Watford superfan Sir Elton John had implored those in yellow to show ‘more f**king passion’ this season when he performed here on Sunday night and a first-half skirmish suggested the players had listened. 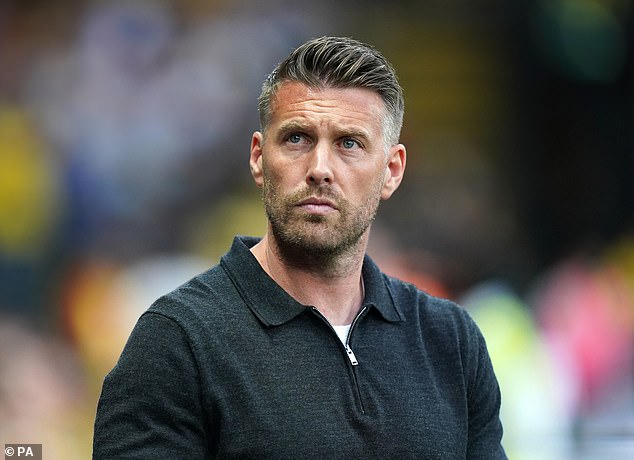 A shoving match between Watford captain Tom Cleverley and United’s Iliman Ndiaye escalated and resulted in Francisco Sierralta and John Fleck squaring up and both receiving yellows.

The Blades, so eager to improve on their fifth-place finish last season, looked dangerous on the break.

Sander Berge tested Watford keeper Daniel Bachmann early on and Ndiaye should have scored when Daniel Jebbison’s flick sent him clear and he outmuscled Kamara.

Jebbison forced Bachmann into a fingertip save on the stroke of half-time with a first-time dink from the edge of the box.

After Pedro’s opener, Watford worked another great shooting position only for the Brazilian to get in the way as Dennis prepared to shoot.