Western Sydney Wanderers’ quest to return to the finals after a four-year absence has taken a step forward after claiming their first three points of the season with a 2-0 win over Wellington Phoenix on Friday night.

Former Wellington striker Tomer Hemed returned to haunt his former club with a second-half winner rubber-stamped by the VAR, before John Koutroumbis scored in the dying moments to clinch a win in Jack Rodwell’s first start for the Wanderers.

“I was building up slowly; the manager and the fitness coaches had a plan that we were putting together,” Rodwell said. “It was good to get my first game and hopefully to build on that.”

The former Manchester City and Everton star’s 81 minutes on the pitch coincided with Western Sydney’s most composed and authoritive display in possession this season that finally provided a foundation for an improved campaign. They were far more comfortable with the ball, watertight without it but still lacking fluidity in attack.

They mustered few clear chances, especially in the first half. Instead, the lion’s share fell to the Phoenix. New Zealander Clayton Lewis came close to breaking the deadlock with a powerful drive from the edge of the area in the 18th minute. After the half-hour, they thought they had done one better.

From a corner, defender Josh Laws pounced on a loose ball inside the box and rattled the back of the net from a metre out but his celebrations were cut short after a linesman flagged for offside. That decision didn’t halt the Phoenix’s charge with winger Reno Piscopo coming close twice before the break. 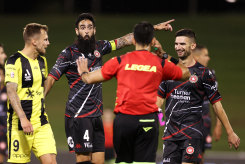 Wellington continued to attack with more purpose after the restart but continued to look most dangerous from distance. Teenager Benjamin Old came within centimetres of scoring 10 minutes into the second half while fullback James McGarry forced a fine save from Tomas Mejias on the hour.

Much of the reason for the Phoenix’s artillery from deep was due to the Wanderers’ solid defence. Former Socceroo Rhys Williams was back to his best and marshalled a tight backline that stifled the Phoenix’s raids inside the box.

After 66 minutes, their brave defending was rewarded further. The Wanderers snatched the lead through Hemed, who shot was cleared off the line but eventually awarded a goal by the VAR which ruled it had crossed the line first.

WIN Stadium began to sound like Parramatta as the vocal travelling supporters erupted and the Wanderers assumed a stranglehold on the contest they had previously spent much of it on the back foot. Phoenix gambled by throwing all 11 players up for a corner in injury time but when the Wanderers won that contest, they found an open Wellington goal. Koutroumbis had the luxury of walking the ball into a vacant net to make it 2-0 on the stroke of full time.

Meanwhile, long before the term “Ange-ball” took Glasgow by storm, “Roarcelona” was sweeping through Australia. Kosta Barbarouses was part of the all-conquering Brisbane Roar side which earned that nickname under Ange Postecoglou, whose swashbuckling style and staggering 36-match unbeaten streak redefined what people thought A-League teams could do.

So the Sydney FC star can speak with some degree of authority when he says he can see similar principles and patterns in the way the Newcastle Jets go about their business. The Jets, who they face on Saturday at Netstrata Jubilee Stadium, are coached by Arthur Papas — an assistant to Postecoglou when Yokohama F. Marinos lifted the J.League title in 2019. 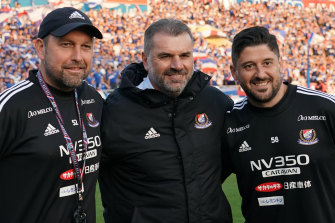 It’s very, very early days, but after two rounds of the new A-League Men, in which the Jets have stood out as one of the competition’s most aggressive teams, it’s hard to ignore the parallels in philosophy.

“I think they try to play in a similar way,” Barbarouses said. “We played them in the pre-season a few weeks ago and you could see the ideas they were trying to implement on the field. They’re going to be a tough side, they’re an exciting team that presses from the front and wants to bring their fullbacks inside to add an extra man into midfield.

“The more they go on in the season and the more time the coach has with them, the better they’re going to get too.”

That much is abundantly true. The Jets are, indeed, a long, long way from the finished product, as their last-start draw against the Western Sydney Wanderers proved. For the first half an hour of last Sunday’s 2-2 draw in Parramatta, they played them off the park. But their failure to convert the many chances they generated left the door ajar for the Wanderers to mount a comeback. 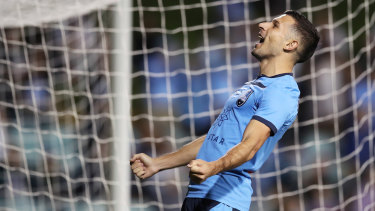 Sydney’s Kosta Barbarouses is back from injury and ready to lend his teammates a helping hand.Credit:Getty Images

The fact that they are so committed to playing attacking football comes as a refreshing change in the A-League, which is generally regarded as a transition league, filled with teams who are more comfortable on the counter than in possession and coaches who lean more towards pragmatism than the sort of expansive football typical of Postecoglou’s teams.

The early signs are good, particularly when it comes to little-known foreigners Daniel Penha and Beka Mikeltadze, who have made eye-catching starts to their respective A-League careers. But until the Jets can fully come to grips with how Papas wants them to play, they’re likely to swing from one extreme to another – which means entertainment for neutral observers, and plenty of opportunities for teams like Sydney FC if they can weather the storm.

“We’re hoping for more of what we served up in the first 30 minutes [against the Wanderers]. I thought the 30 minutes were extremely positive, and then we fell a little bit into a trap of taking our foot off the pedal,” Papas said.

“To be successful in the long run, you need to be able to do that for 90, 95 minutes, and that’s part of what we’re working towards. But I’ve got a lot of belief in the players, they’ve got a lot of belief going to that ground against a high-quality opponent and playing that type of football. We’ve just got to get better and get better outcomes from those performances.”

Sydney desperately needs a victory to boost internal confidence, having gone winless in their first two matches of an A-League season for the first time in almost a decade. The return of Barbarouses from a minor injury should give them cause for optimism.

“I’m really excited to get started and give the boys a bit of a hand,” he said. “I think the boys have been doing really well – the results haven’t been the best, but hopefully I can add a bit more quality to the team and we can kick on from there.”