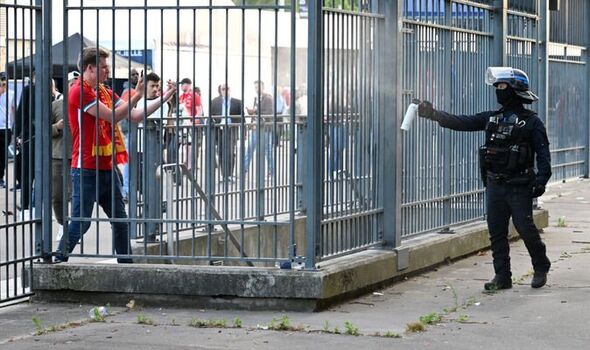 The government has called for an investigation into the grim scenes that overshadowed Liverpool’s Champions League final clash with Real Madrid in Paris. Reds supporters were tear gassed by police and were forced to wait in lengthy queues, forcing kick-off to be delayed three times.

Liverpool released a damning club statement in which it called for a full investigation to be launched into the cause of the chaos. UEFA, in turn, blamed fans who they accused of turning up late and possessing ‘fake’ tickets.

And now, the UK government has called for UEFA to launch a probe. Culture secretary Nadine Dorries said: “The footage and accounts from Liverpool fans and the media on their entry to the Stade de France last night are deeply concerning. Thousands of ticket holders travelled to Paris in good time to support their team in the biggest match of their season.

“I urge UEFA to launch a formal investigation into what went wrong and why, in coordination with stadium staff, the French Police, Federation Francaise de Football, Merseyside Police and Liverpool Football Club. It is in the interests of everyone involved to understand what happened and to learn lessons from these events.”

Footage on social media showed fans being tear gassed and pepper sprayed outside the Stade de France. Lengthy queues meant that the kick-off was delayed three times, with the match finally starting at around 8:40PM UK time.

We’ll be bringing you the very latest updates, pictures, and video on this breaking news story.

For the latest news and breaking news visit:/sport

Stay up to date with all the big headlines, pictures, analysis, opinion, and video on the stories that matter to you.