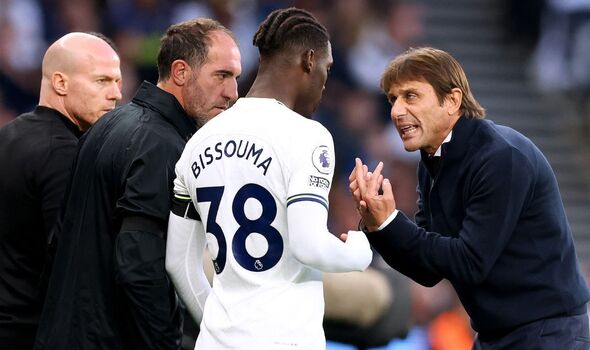 Former Tottenham striker Louis Saha has drawn comparisons between Yves Bissouma and Tanguy Ndombele following the Mali international’s uncomfortable start to life in north London. There was a sense that Spurs had pulled off a major coup when landing the combative midfielder last summer from Brighton in a deal worth around £25million.

But for one reason or another, Bissouma has struggled to live up to expectations since making the switch to Spurs – failing to nail down a place in the side.

Even when he has featured, Bissouma has failed to replicate the same ball-winning ability that put his name up in lights at the Amex.

In the view of Saha, the player’s struggles are difficult to understand given he has all the attributes required to succeed.

“I don’t know why Bissouma has struggled. He’s technically brilliant and physically he’s a beast.”

The former Frenchman believes Bissouma is walking a similar path to Ndombele after the Napoli loanee failed to make the grade at Tottenham despite his talent.

“It’s a strange one and Tanguy Ndombele also struggled and went to Italy,” Saha added.

“Conte’s frustration is coming from midfield as there’s talent there but we still need experienced players – look at what Christian Eriksen has brought to United.

“I think Spurs have asked too much of Bissouma too quickly.”

Bissouma has featured in all but two of Spurs’ 18 Premier League matches this season – starting just eight.

He also looks set to fall back down the pecking order when Rodrigo Bentancur returns to action to partner Pierre-Emile Hojbjerg in the middle of the park.

There has been loan interest from Salernitana but Conte is expected to request that the Senegal international remains at Spurs this month.

Meanwhile, Tottenham are hopeful that Napoli will look to sign Ndombele on a permanent deal following his loan spell in Italy.

The Frenchman was recently captured arguing with Napoli boss Luciano Spalletti following the 1-0 defeat to Inter, sparking fears their relationship could be set to sour.