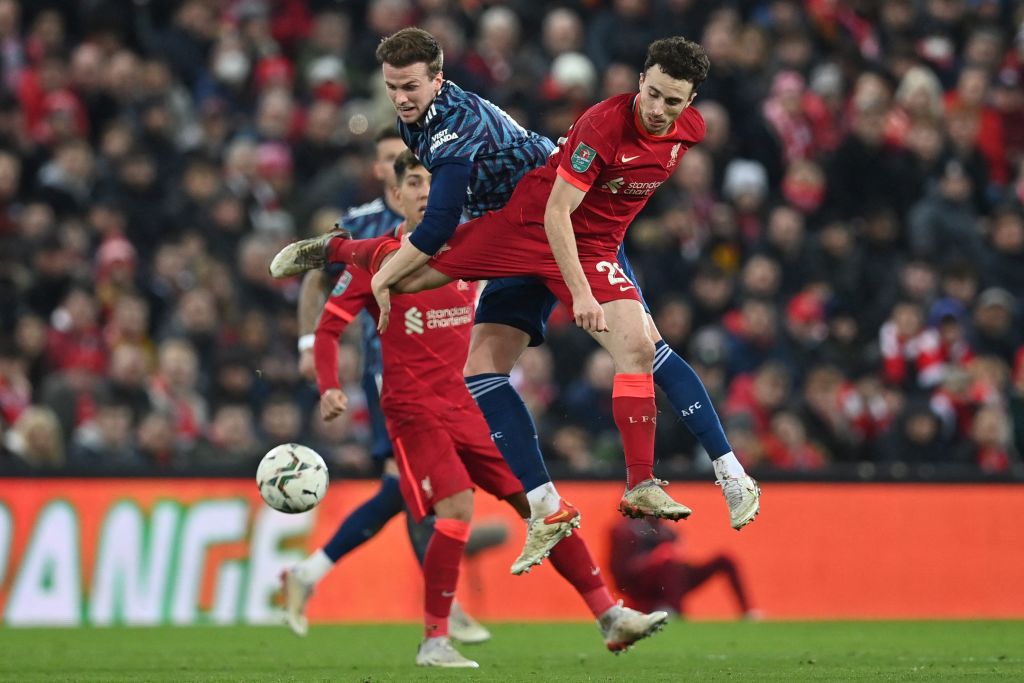 Arsenal kept their hopes of reaching the Carabao Cup final alive after holding Liverpool to a goalless stalemate in a cagey semi-final first leg at Anfield, despite Granit Xhaka’s early sending off.

The Gunners were already short in midfield, with Martin Odegaard, Emile Smith Rowe and Thomas Partey all missing, and the situation went from bad to worse as Xhaka was shown a straight red card for a clumsy foul on Diogo Jota in the 24th minute.

Eddie Nketiah was sacrificed for Rob Holding as a consequence of the sending off – the fifth of Xhaka’s Arsenal career – and the visitors dug deep to cling on until half-time under a barrage of free-flowing Liverpool attacks in front of a noisy Kop.

The hosts’ frustration grew in the absence of Mohamed Salah and Sadio Mane as a battling Arsenal kept them at arm’s length, to the extent that they managed just one shot on target across the entire 90 minutes.

A glorious opportunity fell to Takumi Minamino at the death, but the Japan midfielder ballooned his effort over the crossbar from eight yards out with the goal gaping and Arsenal held firm to come away from Merseyside with an impressive draw.

Mikel Arteta will be without Xhaka when Arsenal welcome Liverpool to the Emirates for what promises to be an absorbing second leg in a week’s time, with a shot at silverware against Chelsea the prize for the winner.

Arsenal displayed signs of nervousness from the off and Aaron Ramsdale was fortunate not to gift Liverpool an early lead after clearing the ball straight into the path of an onrushing Jordan Henderson.

Liverpool came close to breaking the deadlock again just moments later as Minamino’s teasing low cross from the left deflected behind for a corner off Ben White, who breathed a giant sigh of relief.

The Gunners were limited to pot shots from range in the opening stages, with Alexandre Lacazette’s wild 19th-minute strike one of just two efforts on goal the visitors managed in the first half.

The momentum swung firmly in Liverpool’s favour as Xhaka was given his marching orders for denying Jota goalscoring opportunity, booting the Portuguese in the ribs with an ungainly attempted clearance.

Xhaka’s sending off means Arteta will be without the Switzerland international for next Thursday’s second leg at home to Liverpool, as well as the side’s upcoming league matches versus Tottenham and Burnley.

Ten-man Arsenal dug deep to keep Liverpool at bay under a relentless wave of attacks heading into the half-time break and the north Londoners showed they were not prepared to lie down in a strong start to the second period.

Neither side had managed to register a single shot on target with an hour gone, but second-half substitute Jones sparked the hosts into life andMinamino came agonisingly close to making the breakthrough from a tight angle shortly after the Englishman’s introduction.

The game opened up with 20 minutes remaining and Liverpool had Alisson to thank as Arsenal had a rare chance in the 72nd minute, with the Brazilian rushing out of goal to deny Bukayo Saka.

Arteta may have feared the worst as the ball fell to Minamino eight yards out from goal in the dying minutes, but a collective gasp echoed around Anfield as the midfielder blazed his effort over the bar.

White capped off a superb individual performance, perhaps his finest in an Arsenal shirt, just moments later with a heroic block to deny Neco Williams, keeping the tie firmly in the balance ahead of the return leg.