It has taken 15 years but Sydney FC are close to finally securing their permanent home with the club set to build a training complex and clubhouse at Macquarie University instead of a site near the airport.

The Sky Blues could unveil plans to build a centre of excellence in North Ryde within the next fortnight once it gains formal approval from the university's board. Sydney FC were expecting to receive the green light last week but that was delayed due to the coronavirus outbreak that has significantly impacted all universities in Australia. 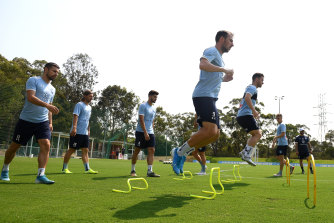 The Sky Blues' A-League, W-League and National Youth League teams have trained at Macquarie for more than a decade but other Sydney FC teams have lived a largely nomadic existence.  Their academy teams train at Football NSW's precinct in Bella Vista in the city's north-west while playing home games at Lambert Park in Leichhardt. The youth team are using Ilinden Sports Centre in Botany West as their home venue for their NPL NSW season while Sydney's W-League team trains at Macquarie but plays home games at Leichhardt Oval and Cromer Park on the northern beaches.

North Ryde may not be close to the club's core supporter bases in the city's south and inner west however it presents the more affordable option for their centre of excellence. As revealed by the Herald, Sydney FC were deep in negotiations with the Inner West Council to build their training complex at Tempe Reserve and discussed the possibility of building their centre of excellence in the precinct around Leichhardt Oval. The latter wasn't deemed feasible due to size and public access and club sources suggest they have not ruled out building their permanent home in Tempe.

However, Tempe is no longer their preferred location due to cost. It is now deemed the most expensive of all Sydney's options as the club will have to fork out several million dollars more to build A-League quality pitches and playing surfaces at the site.

By contrast, the sporting fields at Macquarie University where the senior team train are already of a very high standard as is another field used by their youth league team.

Sydney FC declined to comment when contacted by the Herald on Sunday.