Sydney FC players won’t even shake hands with each other

If Sydney FC players don't shake hands with their Melbourne Victory opponents before Saturday night's Big Blue, it won't be out of disrespect for their fiercest A-League rivals.

The Sky Blues have banned the practice internally in an effort to combat the rapid spread of the coronavirus after several cases emerged in the vicinity of their Macquarie University training base. 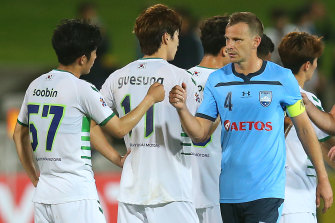 Players were addressed by the club's high performance manager Elias Boukarim on Friday morning on the importance of good hygiene practices and have been told to avoid any unnecessary contact with each other.

Instead of shaking hands, players have been encouraged to "foot shake" by tapping their feet together.

The handshake embargo has been in place for several days, with Sydney and South Korean club Jeonbuk Hyundai Motors agreeing before Wednesday night’s AFC Champions League clash to forgo the usual pre-match greeting and bump fists instead.

"We're just making sure everything we do around here that we give ourselves the best chance to stay nice and clean and not get affected by the coronavirus," coach Steve Corica said on Friday.

"Our head of high performance is making sure they do the little things – clean hands all the time, try not to sneeze in front of people and stuff like that. 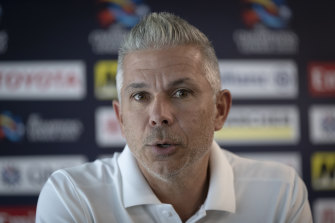 The last thing Sydney FC coach Steve Corica wants as the pointy end of the A-League season approaches is to lose one of his players to a two-week coronavirus isolation period.Credit:Getty Images

"It's an important time of year [for the team] and if we don't shake hands, it's not a sign of disrespect, it's just making sure we following protocol and do our best to stay healthy."

There have been confirmed cases of the coronavirus at an aged care facility in Macquarie Park, where a 95-year-old woman became the first person in NSW to die from the illness, while a childcare centre across the road from it has been shut down as staff undergo tests.

A lecturer at Macquarie University has been diagnosed with coronavirus and is in isolation at Westmead Hospital. The nearby Epping Boys High School was also closed on Friday after a student tested positive for COVID-19.

"It's just us, knowing the proximity of people that have been diagnosed with it, making sure our guys exercise good hygiene practices," Boukarim told the Herald.

"[There's] elevated risk in the team environment, because they're in close contact with each other.

"We're making sure we do everything to reduce the risk of transmitting it between the boys but also reducing any anxiety around it and reiterating that it's not hugely different to influenza, the flu – it's just us trying to manage the spread of it so it doesn't become as widespread as influenza … [and] if there are any guys with any respiratory symptoms, letting us know."

Bottles of hand sanitiser were on every table at the club on Friday morning, with Boukarim anticipating the same measures will soon be rolled out at all other clubs in all codes over the coming days and weeks.

But what happens if Sydney scores a goal against Victory on Friday night, players rush to celebrate with each other, and instinct takes over?

"Good question," Boukarim said. "I'm sure we can't control that aspect of it. Let them enjoy themselves … our club doctors are all over it.

"We've got protocols in place, we're taking a lot of advice from NSW Health, the AIS have done a fair amount on it. We're all working together to make sure we contain it as much as possible."