Report and highlights from the Sky Bet Championship clash between Swansea and Sheffield Wednesday at the Liberty Stadium as Andre Ayew earned the Swans a point after Adam Reach had put the Owls ahead.

Adam Reach put Wednesday ahead with their first goal in open play since October 21, but substitute Ayew gave Swansea a share of the spoils after a much-improved second-half display. 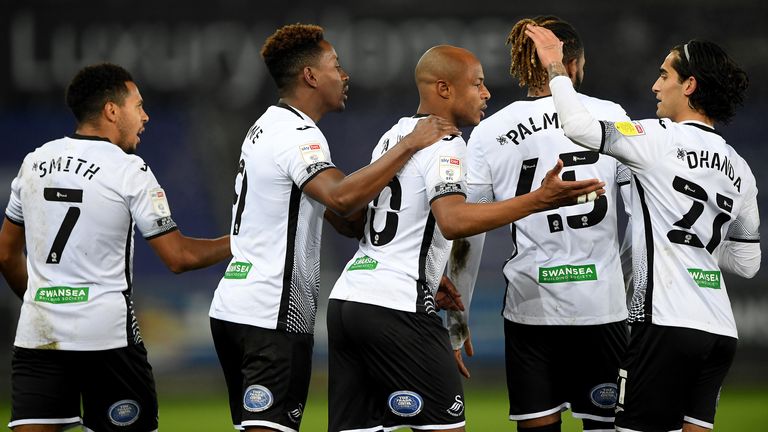 The draw kept Swansea in fourth place in the Sky Bet Championship but it showed how much Steve Cooper’s side depend on Ghana striker Ayew, who had spent the first half on the bench following a muscle injury.

This was Pulis’ second match in charge of Wednesday since succeeding Garry Monk, but the Welshman had never won a game at the Liberty Stadium during his long managerial career.

Wednesday had lost five of their previous seven games and their main problems lay in front of goal with only one penalty converted in the last six matches.

Swansea dominated the early possession but it was the Owls who went close to breaking the deadlock after 12 minutes.

It was the last involvement for Owls goalkeeper Kieren Westwood who, having been brought out of the Hillsborough cold by Pulis, appeared to have pulled a groin muscle when stretching for the cross and was replaced by Joe Wildsmith.

Wednesday were slowly imposing their will on the contest and the first goal of the Pulis era arrived after 27 minutes via a clever corner routine.

Barry Bannan sent the ball in low and Reach fired home after moving from the back post and finding himself unmarked 10 yards from goal.

Reach blazed over from a Callum Paterson knock down and Swansea boss Cooper responded at the interval to his side’s failure to register a first-half goal attempt.

Ayew and Kasey Palmer were sent on in attacking positions as Cooper abandoned his wing-backs system and went to a four-man defence.

Jamal Lowe planted a shot wide at the near post before Swansea were level on the hour due to a spot of Ayew brilliance.

Connor Roberts fed him but there was little hint of danger until Ayew engineered space in a crowded penalty area and beat Wildsmith with a superb curling effort.

Swansea were now well on top and Yan Dhanda’s 25-yard effort flew just past the post with Wildsmith beaten.

Dhanda was inches away again with a free-kick and Wildsmith tipped over Ayew’s late effort.

Wednesday survived again when the ball ended up in their net after an almighty goalmouth scramble in the fifth minute of stoppage time, but referee Andy Woolmer had whistled for a foul much to their relief.