The World Cup break may have arrived at the perfect time for this ailing Rangers team – and the worst possible juncture for its embattled manager.

The axe may not fall this weekend or even this week but it’s hard to see an Ibrox future for Giovanni van Bronckhorst, who required a late intervention from VAR to secure his team’s penalty-kick equaliser in Paisley.

Bruised by a succession of Champions League drubbings and undermined by a home draw against Livingston, the Dutchman admitted he needed a maximum nine points from the three remaining Premiership matches going into the hiatus for Qatar 2022. He’s managed only four. 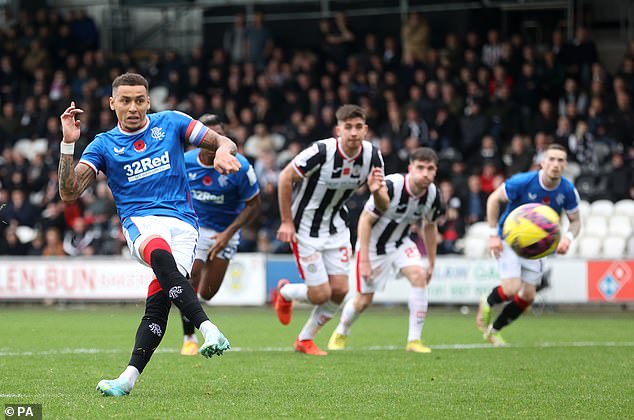 With Celtic easing further ahead at the top, the case for Rangers’ title challenge has become almost impossible to make a full week before they switch on the Christmas lights in George Square.

In those circumstances the coach’s position is close to untenable. You’d imagine the Ibrox board will at least explore the options for change before the Premiership resumes on December 15.

Even accounting for the fact an unfeasibly long injury list has left Rangers significantly under-strength, this is a team playing without conviction and with no clear belief in what they are trying to achieve.

Contrast that to Stephen Robinson’s St Mirren, a team forged in their manager’s fiery image.

Saints’ 2-0 win over Celtic back in September was the surprise result of the SPFL season to date and this was to be another exercise in energetic disruption. 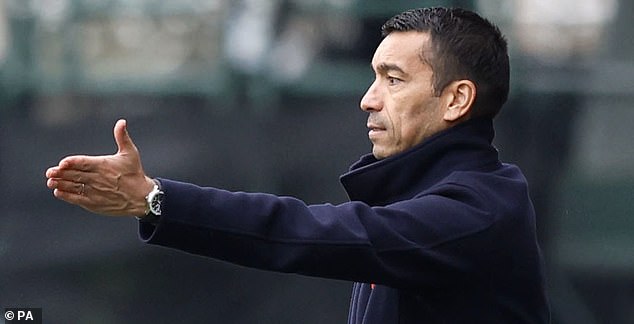 Key to beating Celtic was the relentless forward play of Jonah Ayunga and he was up top again alongside Curtis Main, a bruising proposition for Leon King and James Sands.

Within ten minutes Ayunga had rolled both centre-backs and set St Mirren on the counter, although the lack of pace in support meant the home team couldn’t take advantage.

If this was Van Bronckhorst’s last chance to stake a claim for his long-term vision, he had precious chips to lay down.

Antonio Colak and Ben Davies were the latest to drop out injured and only the return of Ryan Jack to the bench offered a measure of relief from the physical issues that have ravaged the squad this season.

Alfredo Morelos was back in for his first league start of the campaign but his woefully inadequate performance served only to remind why he has become a distant second choice to Colak.

Room was found in midfield for Glen Kamara, a pivotal player under Steven Gerrard yet one who has rarely looked happy since Van Bronckhorst took the reins almost a year ago.

Rangers got some joy down the left flank. Ryan Kent, clearly trying hard to build on the signs of rejuvenation in his midweek performance against Hearts, was one threat but so too was the overlapping Borna Barisic. 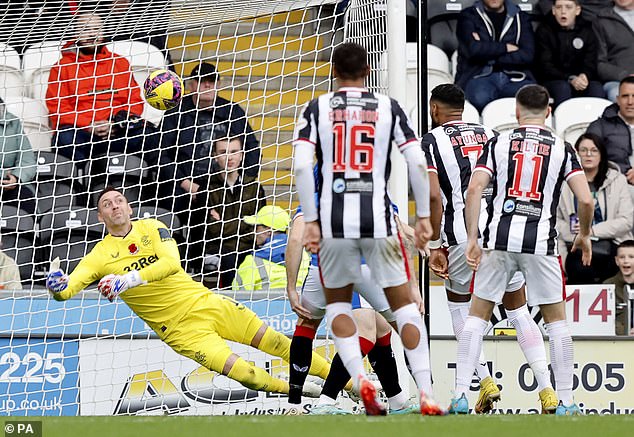 The Croatian is bound for Qatar this week and was at his forward-thinking best as he picked out Scott Wright with a back-post cross. The former Aberdeen winger is not renowned for his heading but attempted with enough conviction to force Trevor Carson into a smart stop.

He may not command the same wage or have racked up anything like a comparable sum in transfer fees but the suspicion remains that there is more to Wright’s game than that of Rabbi Matondo, the man he replaced in the starting team.

Wright’s willingness to face up a defender and drive was evidenced as he skipped through a couple of challenges and shot wide. Similarly, Malik Tillman fashioned himself a shooting opportunity on the edge of the box only to miss the target.

St Mirren were applying less finesse to their attacking play but were no less effective.

Main barrelled into the gap between Sands and Barisic to head goalwards from Scott Tanser’s diagonal pass and his sheer physicality increasingly told as half-time approached. 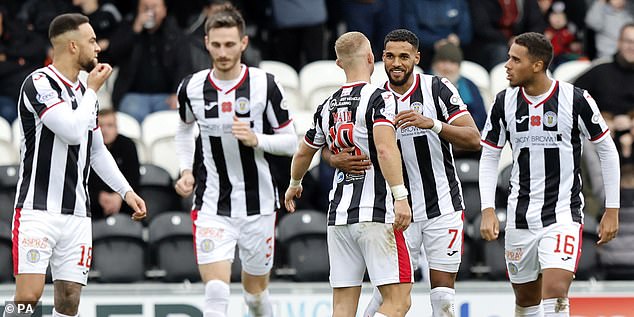 St. Mirren players celebrate after opening the scoring thanks to Ayunga’s (inside right) goal

Greg Kiltie started linking with the striker and had one golden chance to tee up a goal when played in by the former Motherwell man.

His low crow cross invited a finish but neither Ayunga nor the hard-running Mark O’Hara could apply the decisive touch.

Indeed the closest Saints went to an opener actually came from a Rangers player as King slashed at Ryan Strain cross, sending the ball flying over his own crossbar.

It’s not just that Morelos’s overall play was poor – his appalling body language was doing nothing but drag morale through the floor too.

Displaying no awareness of his own shortcomings, the Colombian was forever slouching off in disgust at a misplaced pass from a team-mate or sulking at a perceived injustice from the referee.

And yet with no other forwards to choose from, Van Bronckhorst kept him on at half-time, instead withdrawing the lukewarm Kamara in favour of Scott Arfield. 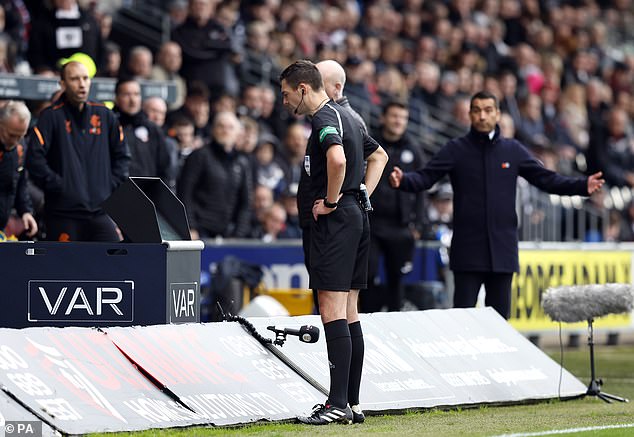 Within seconds of the restart Morelos had got himself booked, needlessly clattering Ethan Erhahon from the kick-off and rendering himself even more of a liability for the remainder of the game.

Almost as quickly St Mirren took the lead and it was no great surprise to see a set-piece routine do the damage.

Declan Gallagher hurled a throw-in off the right touchline which Main flicked on at the near post. Ayunga met the ball firmly, forcing Allan McGregor into a parried save.

King tried and failed to deal with the rebound and Ayunga feasted on the scraps, forcing the ball home at the second attempt.

The last thing Van Bronckhorst needed was another injury, far less one that afflicted one of his defenders.

Hurt in an aerial challenge with Main, King required extensive treatment before being removed on a stretcher with his head in a neck brace.

Jack took his place, with Lundstram retreating into the back four. 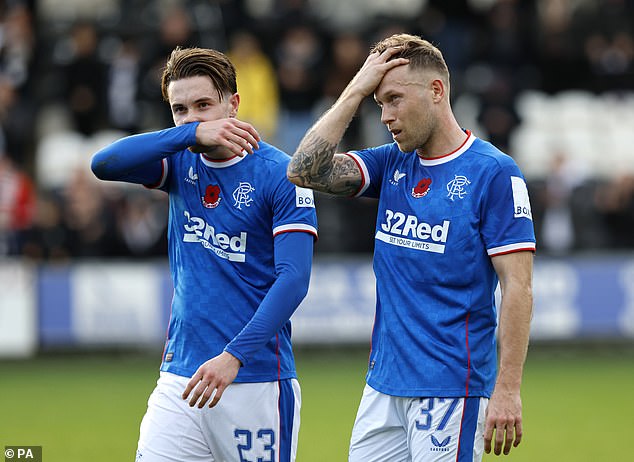 Ayunga almost doubled Saints’ advantage with his last involvement in the game, fending off Lundstram before drilling a shot narrowly wide.

St Mirren could have done with the cushion.

As the game edged into the tense final minutes Kent picked up the ball and drove for the byline under the close attention of Marcus Fraser. His fall was met with a howl from the support behind the goal – and also a yellow card from referee Kevin Clancy.

There was then a pause as the incident was reviewed in Baillieston with Clancy then encouraged to approach the monitor.

A change of mind was inevitable and so the penalty was awarded and Kent’s card rescinded. Tavernier’s rising shot was powerful enough to evade Carson’s grasp.

Accounting for the penalty check and the long delay while King was treated, there were nine minutes added on.

He may be horribly out of form but Kent remained Rangers’ best hope to the end, drawing a save out of Carson after chopping back for the drive.

Jack had one final chance but, presented with a free header from Tavernier’s corner, he headed weakly at the keeper. 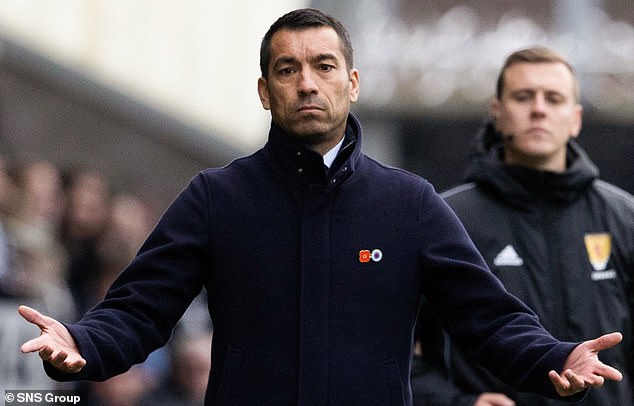 MAIN MAN: MARK O’HARA didn’t stop running for St Mirren and rarely did he waste a pass either.