Spain, Serbia and Croatia are heading to next year’s World Cup. Sweden, Portugal and Russia aren’t – not yet, anyway.

Aleksandar Mitrovic’s 90th-minute header left Cristiano Ronaldo and Portugal stunned in a 2-1 win for Serbia in Lisbon, which gave Serbia an automatic qualifying spot at the World Cup in Qatar. Portugal still have a chance to qualify, but they must navigate a four-team bracket in the play-offs in March. 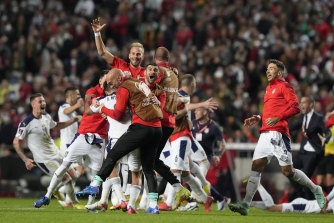 Serbian players celebrate their win and place in the World Cup.Credit:AP

All of the teams that booked a World Cup place in Europe on Sunday did so with dramatic late goals.

Spain only needed a draw in their last game against Sweden to qualify, but Alvaro Morata made sure in the 86th minute with the only goal in a 1-0 win to leave veteran Sweden star Zlatan Ibrahimovic’s hopes of another World Cup appearance depending on the play-offs.

Croatia laid siege to Russia’s goal on a waterlogged field quickly turning into a swamp, and were finally rewarded when a Russian defender scored an 81st-minute own-goal, enough for a 1-0 win.

Russia, too, head to the play-offs, which start on March 24 and will sort 12 teams – 10 group runners-up and two with strong records from the Nations League – into three brackets of four teams. Each bracket has one World Cup place. The draw takes place on November 26 in Zurich.

Portugal were in a strong position when Renato Sanches scored the opening goal after just two minutes against Serbia, but Dusan Tadic kept Serbia in the game with an equaliser in the 33rd. Mitrovic’s late header silenced the crowd and shocked Portugal’s players, including Ronaldo, who sat on the field at the final whistle.

“It was an amazing game, fully deserved,” Mitrovic said. “I think we deserved to win the game and to be in Qatar.”

Beating Portugal for the first time marks a turnaround after Serbia failed to qualify for this year’s European Championship.

There’s one positive for Portugal. Their comparatively strong record in the group means they will be one of the seeded teams for the play-offs in March and will get a home draw for the single-leg bracket semi-final game. Portugal last missed a World Cup in 1998.

Substitute Morata scored the winner for Spain after Dani Olmo’s long-range shot bounced off the post to send Spain to their 12th consecutive World Cup. 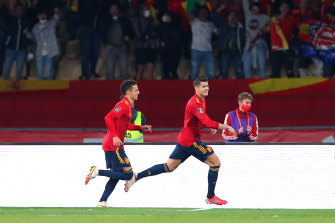 At the age of 40, Ibrahimovic was bidding to reach his first World Cup since 2006 with Sweden – he didn’t make the squad in 2018 – but couldn’t change the game after coming off the bench in the 74th.

That ended a campaign that seemed to be under control for Sweden before a shock 2-0 loss to Georgia on Thursday.

The runners-up from the 2018 World Cup, Croatia, had to brave 2018 host team Russia and the weather to book their place at next year’s tournament.

In driving rain on a waterlogged pitch that forced Croatia to switch their game plan to long shots and crosses, an own-goal from Russian defender Fedor Kudriashov handed Croatia a win and a place in Qatar as group winners.

Croatia dominated the game against a Russian team for which a draw would have been enough to finish first, but poor shooting and some solid saves from goalkeeper Matvey Safonov made for a tense finish. Russia will be seeded in the play-offs.

On a night of drama for other big European teams, Germany stayed calm in a straightforward win. Germany qualified last month and have spent this week burnishing their already impressive goal difference to +32, the best in European qualifying at the moment.

Except for Hansi Flick’s winning record as Germany coach, there wasn’t much riding on the 4-1 win over Armenia, a team that had only the slimmest mathematical chance of qualifying for the play-offs. Two goals from Ilkay Gundogan helped Flick earn his seventh win from seven games in charge.

North Macedonia remain in contention to reach a World Cup for the first time after beating Iceland 3-1 to secure a spot in the play-offs. Eljif Elmas scored twice for his team, which will be unseeded. Romania beat Liechtenstein 2-0 but missed the play-offs because of North Macedonia’s win.