Chelsea youngster Billy Gilmour looked like a “world class” midfielder in the FA Cup win over Liverpool on Tuesday, claims Manchester United legend Roy Keane. Gilmour put in a man-of-the-match performance as Chelsea beat Liverpool 2-0 in the fifth-round tie at Stamford Bridge. It was just the 18-year-old’s second start for the Blues first team.

Gilmour’s performance led to him being named in the starting XI in a Premier League match for the first time on Sunday when Everton visited west London.

And ahead of the match, Keane raved over the teenager and described how his midweek performance got him out of his seat at home.

“Well from his performance the other night, he was fantastic,” Keane said on Sky Sports.

“I was sitting at home, I had a cup of tea and bit of chocolate in front of me and I didn’t have the volume on. 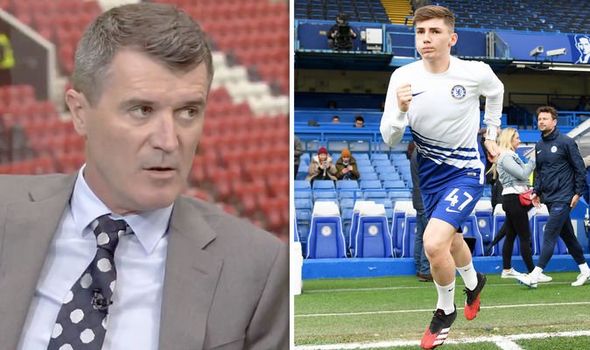 “As the game started I literally got out of my seat, which I very rarely do, and I thought ‘Who is this kid in midfield?’.

“There are certain traits you want from a midfielder, obviously they’ve got to be quality on the ball, football intelligence, composure – he had everything.

“It was one of the best performances I’ve seen in a long, long time.

“The downside for the kid now is he’s got to back it up. He started so well and Frank [Lampard]’s made the point, it’s okay coming in and doing well, he’s got to keep that up now.

“A different type of test today for him to back it up.”

And when pushed on what exactly impressed him about Gilmour, Keane said it was everything about the midfielder.

He added: “Just his general play, the way the game started. I thought he was like a world class player, that’s what he looked like straight away.

“I thought it was one of their experienced lads and I just kept a close eye on him for the rest of the game and everything he did drove the game.

“It just had quality written all over it and obviously he looks a small kid but big composure about him and I’m looking forward to seeing him again today.”

Earlier this week, Chelsea boss Lampard challenged Gilmour to continue to perform like he did against Liverpool.

“He’ll understand it was a very good game for him but that the hard work starts now.

“I think he should quite rightly enjoy the moment, and I’m delighted for him.

“But in terms of how I’ve seen him around the place, it’s the same attitude, same training, same ethics, same quality; so all good.”