A box of "Ronaldinho No.10" jerseys might never be opened, with the Brazilian star unlikely to play in a bushfire relief charity match in Sydney next month after his arrest in Paraguay over the weekend.

The former World Player of the Year was set to be announced this week as the headline act of the Football For Fires match at ANZ Stadium on May 23.

Instead Ronaldinho is languishing inside a Paraguay prison after being charged with entering the country on a fake passport. 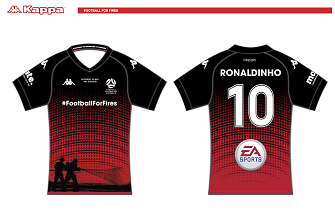 Ronaldinho’s jersey for the Football For Fires match had already been designed.

The news was a blow to the event's promoters, who had struck a deal with Ronaldinho to play in the match days earlier, and had wasted no time in having his jersey designed, printed and shipped.

The jerseys may never be worn, and auctioned off to charity instead, after Ronaldinho suffered the latest blow in a period of financial troubles. He had both his Brazilian and Spanish passports cancelled, as creditors chased him for millions in debt, and reportedly had 57 properties seized.

Through his lawyer, Sergio Quieroz, Ronaldinho pleaded innocent, suggesting he wasn't aware the document was fraudulent.

"Ronaldinho did not know that the passports were irregular and they co-operated fully with authorities," Quieroz told Brazilian media.

However, Ronaldinho could reman in custody in Paraguay until the end of his trial having been deemed a flight risk by local authorities.

Despite his difficulties, the 39-year-old was willing to put his name to a good cause in Australia by playing in the Football For Fires charity match. While his participation seems unlikely now, the door hasnt' been shut by promoter, Lou Sticca.

Should Ronaldinho be released from Paraguayan prison before then, regain access to his passports and get a visa for Australia, he will still be welcomed at the match, Sticca said.

"Having spoken to his representatives, it seems that he and his brother were duped into this passport scenario," Sticca said.

"If he sorts out this situation and meets the entry requirements to get into Australia, we will welcome him to the Football for Fires match with open arms. He is an icon in world football and it would be sad if the football family was deprived from watching him play due to this passport situation."

While Ronaldinho would have been the star attraction, there is no shortage of former world-class footballers in the match. Former Chelsea star Didier Drogba is attending alongside former Juventus captain Claudio Marchisio, ex-Manchester United player Park Ji-sung and 1998 World Cup winner David Trezeguet.

The match will be televised on free-to-air in an attempt to raise awareness and funds for those affected by the bushfires.

"We are about to announce a major update on television rights. The game will be shown domestically in Australia on free-to-air (television) and a massive international demand will see the game shown on a number of different platforms, including pay per view options," Sticca said.