Ange Postecoglou has challenged football in Australia to stay united and ensure the A-League’s bright new era does not become another false dawn.

The Celtic manager has plenty on his plate a third of the way into his first season in Scotland, but still keeps a close eye on football back home and is eager to see what the future holds for the A-League. 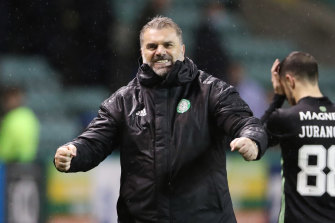 Ange Postecoglou might have his hands full at Celtic but still keeps a close eye on the A-League and all matters Australian football.Credit:Getty

With the club owners now in full control of the competition, a new broadcaster at the helm, and a deal for $130 million in private equity investment expected to be locked away in the near future, there is genuine enthusiasm coursing through all parts of the game ahead of Friday’s season opener between champions Melbourne City and Postecoglou’s old side Brisbane Roar.

Postecoglou intends on watching as many games as he can, since they will be broadcast into Glasgow at a reasonable time mid-morning. He said he was eager to watch the development of a fresh generation of players and coaches.

But he stressed the most crucial thing for the sport was to ensure the positive momentum is carried through for as long as possible, and to resist the usual urge in Australia to fall back to infighting and bickering when it wears off.

“Another new era for the game. We’ve had these before, and they usually start with enthusiasm and I guess the key to that is to make that enthusiasm into something meaningful and tangible that actually grows the game,” Postecoglou said in a Zoom call with Australian media on Tuesday evening.

“Inevitably when a new era starts, people – especially in Australian football – love to get right behind it but it doesn’t take long for people to pick things apart and almost predict our own demise, in many respects. 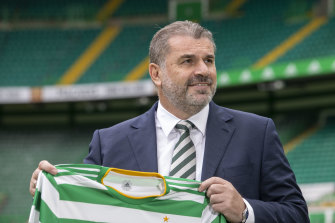 Ange Postecoglou is blazing a trail for Aussie coaches overseas.Credit:Getty

“I’m hoping this early enthusiasm sticks and people understand that there’s going to be challenges for the game, like there always has been, and what we do know about Australian football is that the few times Australian football’s been united, it can accomplish great things. But too often it’s divided within itself, which usually ends up with things not progressing as they should.”

It may have been a long time since Postecoglou coached in the A-League but his imprint on it remains heavy. One of his former assistants at Yokohama F. Marinos, Arthur Papas, will be at the helm of the Newcastle Jets for the first time. Another he worked closely with during his time with the Socceroos, Ante Milicic, is in charge of Macarthur FC.

“I’ve given opportunities for guys and the rest is up to them. They’re charting their own careers and their own paths and I’ve always encouraged them to think their own way and take their own journeys,” he said.

“They’re all pretty clear – they’re not going to be copying what I’m doing because there’s no point in doing that, I’m different to all of them. It’s great for Arthur to get an opportunity in the A-League, he’s worked hard in his career, he’s been prepared to move abroad and coach in some tough places. I’m sure he’ll do a good job.

“I’ll be following him, and Tez at Macarthur. It’s great to see Musky [Kevin Muscat] and Pete [Cklamovski] doing well in Japan, guys that I’ve worked with. Great to see Popa [Tony Popovic] back in the league, somebody I rate really highly as well, John Aloisi, even guys like Warren Moon and Carl [Veart] and Richard [Garcia] over in Perth.

As for matters Celtic, Postecoglou said he was enjoying life in Glasgow, albeit cognisant he is yet to win any silverware.

After a difficult initial period he has become widely revered among the Hoops’ massive support base, who serenaded him with a customised rendition of Last Christmas after a 4-2 win over Dundee last weekend.

They are still alive in the Europa League, face St Johnstone in the Scottish League Cup semi-final this weekend, and sit second on the Premiership ladder – four points behind Rangers, who are searching for a new coach after Steven Gerrard left for Aston Villa.

While Gerrard’s departure could mean instability at Rangers and an opportunity for Celtic to take the ascendancy in Scotland, Postecoglou wants his players to keep their focus narrow.

“It is very intense over here, there’s a story every day about something, so if you start buying into that stuff you’ll be chasing things down rabbit holes that you’ll never get out of,” he said.

“We’ve been really good so far, concentrating on ourselves and making sure we keep building on what we’re doing. We had a challenging start but we’ve hung in there and shown resilience to give ourselves an opportunity in all the competitions we’re in at the moment and that’s been probably the most pleasing thing.

“What’s got us to this place is concentrating for ourselves, and that’s what we’ve got to continue to do and not worry about the external noise.”