The Socceroos let slip a golden chance to move to the top of their World Cup qualifying group after they were held to a 0-0 draw in a tense, often fiery clash with Saudi Arabia on Thursday night.

Australia’s 40-year unbeaten run in live qualifiers remains intact, but the result does little to advance the team’s hopes of securing a direct route to next year’s World Cup in Qatar after a scratchy display in their long-awaited first match on home soil in 763 days.

To make matters worse, key defender Harry Souttar could be out for some time after suffering what appeared to be a serious knee injury late in the second half.

Souttar had to be stretchered off CommBank Stadium after his knee buckled as the Socceroos scrambled to contain an attacking surge from the Saudis with 15 minutes left. The 23-year-old, who plays in England’s second tier for Stoke City, has been linked with a move to several interested Premier League clubs in the January transfer window.

Australia had a handful of good chances to take the lead in the second half but in the end, they were lucky to hang on for a draw as the Green Falcons – who drew the ire of the 23,314 fans on hand for repeatedly exaggerating contact from Socceroos players – finished with their tails up. Livewire Al-Hilal winger Salem Al-Dawsari and captain Salman Al-Faraj peppered Mat Ryan’s goal repeatedly in the final 10 minutes after Souttar’s injury killed off the positive momentum the hosts had built.

The picture at the final whistle told the story as cheery Saudi players celebrated having secured a valuable point – while the Socceroos were mostly on their haunches, some in disbelief at what had unfolded. 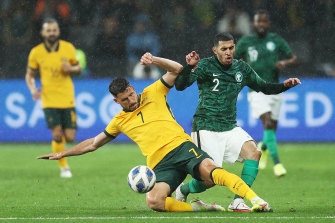 Mathew Leckie tangles with Sultan Al-Ghannam on a wet night in Parramatta.Credit:Getty

The stalemate leaves the Socceroos three points behind the Saudis, who remain undefeated on top of Group B having won all four of their previous games. Graham Arnold’s men can afford no more slip-ups in their World Cup qualifying campaign, which continues on Tuesday night against China in the UAE.

The match got off to a frenetic start as the ball zipped around a picture-perfect surface in Parramatta, which had been drenched by heavy showers throughout Thursday that did not relent at any stage during the evening.

But as the first half wore on, the Saudis grew more comfortable in possession, and Australia offered little in the way of structured play in attack; the plan, it seemed, was to knock it forward quickly down the wings and hope for the best. The visitors went into half-time with 52.4 per cent of possession, albeit with only one shot on goal; the hosts’ five chances seemed to come mostly by chance.

Fifteen minutes into the second half, the Socceroos should have taken the lead when Mathew Leckie latched onto a ball over the top, shed his marker and was one-on-one with the keeper. He seemed to pause for an eternity before shooting from an acute angle, but his effort was saved comfortably by the brilliant Mohammed Al-Yami. Seconds later, it was Jackson Irvine’s turn to miscue from point-blank range.

The Saudis slowly fought their way back into the match – then Souttar’s injury, and the lengthy delay that followed, completely swung the momentum their way. Arnold and the Socceroos will be grateful the final whistle came when it did, and they have much work ahead of them after such a disjointed performance.