‘Not a team’: Salvachua savages Victory players after capitulation

Melbourne Victory interim coach Carlos Salvachua has accused his side of ignoring tactical structures, playing without discipline and operating as individuals rather than a team after their 4-1 humiliation at the hands of old rivals Sydney FC on Saturday night.

Salvachua could barely contain his anger after the game, labelling his team's second-half performance, when they shipped three goals against a side that was playing their fifth game in 17 days, as unacceptable. 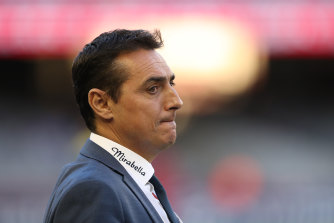 The Spaniard normally presents as mild-mannered, polite and affable, but on Saturday night he was highly critical of the way his team had lost their discipline and shape in the second half.

"The coaches are there to fix the things, not to score the goals," he said.

"We are here to work, to prepare the games and I think the score in the second half is not acceptable for a Melbourne Victory team playing in that way.

"I think that (they) don't respect the structure in the second half.

''You want to play individually, (it) just depends on your quality. In the second half we saw a big difference between just the quality (of the two teams).

''A team without structure is not a team, it's just individual players.

"I'm not happy because we cannot do this kind of difference in halves. If you can (perform in) the first half (when Victory took an early lead and went to the break level at 1-1), you can do the second half as well in the same way, with the same 11. I'm not happy for that."

If Salvachua is to have any chance of snaring the job on a full-time basis next season, he is going to have to make major changes to the personnel and mindset of his struggling side in the last six games of the current campaign.

A team without structure is not a team, it's just individual players

Injuries and suspension will force his hand, but Salvachua will consider bringing in younger players and fringe squad members in a bid to galvanise his floundering first team.

German defender Thomas Hoogland will miss next weekend's trip to Wellington after being sent off in the dying moments of the defeat after conceding a penalty, while Marco Rojas rolled his ankle and now has a question mark hanging over him ahead of the fixture against his former club.

Salvachua is hopeful though concerned about the prospects of Rojas, who gave Victory early hope with a tremendous individual goal, being available next week.

"He rolled his ankle and he asked for a change because he cannot continue playing the game, Salvachua said.

"I don't know now (the severity) in this moment, for sure that tomorrow he cannot train but we'll see during the week."

Another centre back – Giancarlo Gallifuoco – will also be absent, Salvachua said, after he was cautioned in a defeat which illustrated the gulf which now exists between the A-League's biggest and historically most successful club, and the one which is looking to usurp its place at the top of the A-League tree.