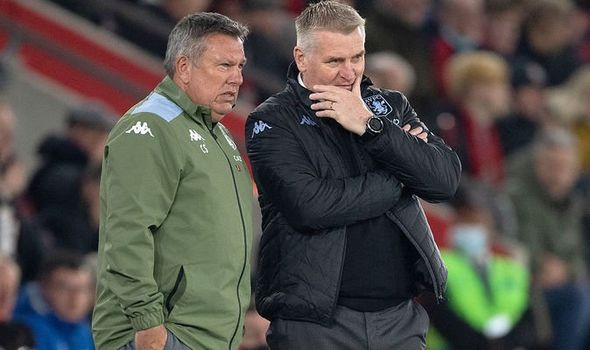 Norwich City are reportedly set to announce Dean Smith as their new manager in the next 48 hours. Former Chelsea boss Frank Lampard rejected the chance to manage the Canaries after holding talks earlier this week. Smith is now set to take the role just a week after being sacked by Aston Villa.

Smith was relieved of his duties at Villa Park last Sunday.

The news came less than 24 hours after Norwich had fired Daniel Farke.

Farke led Norwich to their first Premier League win of the season, a 2-1 victory at Brentford on Saturday, but was swiftly told his services would no longer be required.

Smith has been in New York this week visiting family but is set for a quick return to management.

The Athletic claims an announcement is set to be made shortly by Norwich.

Former Leicester boss Craig Shakespeare will once again be Smith’s No 2 after holding the role at Villa.

Smith has the unenviable task of trying to keep Norwich in the top flight.

They currently sit rock bottom of the Premier League, five points from safety.

Norwich have conceded 26 goals in their 11 matches, scoring just five.

If Norwich were to go straight back down to the Championship, Smith could be the ideal man to get the club out of the second tier of English football.

He led Aston Villa back to the Premier League in 2019 and kept the club in the top flight for the next two campaigns.

Smith was given his marching orders by Villa with the club sitting 16th in the table.

Villa have also moved fast to find the 50-year-old’s replacement, appointing Steven Gerrard on a three-and-a-half-year deal on Wednesday.

Norwich are set to be Smith’s fourth job in management after spells at Walsall and Brentford before becoming Villa boss in 2018.

Smith, who supported Villa as a boy, sent a message to the club’s supporters after his dismissal.

“To be appointed the Head Coach of Aston Villa, the club I supported throughout my childhood, was and remains something I am extremely proud of,” said Smith.

“To the coaches, staff and players, my sincere thanks to each and every one of them.

“To the Aston Villa fans who showed me nothing but love and support from my first day in the job to my last, a heartfelt thank you from my family and I.

“The Aston Villa board’s aims and ambitions are to take our club back into European football and I would love nothing more than seeing the club achieve that.

“I’ve always said that I was simply a custodian of this great football club, and my aim was to leave it in a better place than I found it. I believe that together we have achieved that.”