Melbourne City boss Erick Mombaerts has confirmed that Austrian defender Richard Windbichler will play no part in the club's finals campaign – and hinted that he may continue to experiment with makeshift centre-half Rostyn Griffiths at the heart of City's defence.

Windbichler, who has made only two appearances since joining City in the offseason, will miss the rest of the campaign because of an ongoing hamstring injury. 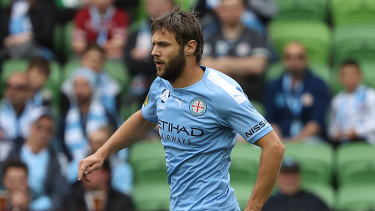 "Richard is in a rehab phase … he can't come back for the end of this season. He has to prepare for next season. He has to work hard and fix his problem with the hamstring," Mombaerts said after his side had seen off Brisbane Roar 1-0 to go second on the A-League ladder.

Griffiths, normally a defensive midfielder, has been pressed into action as an emergency central defender and again had a strong game on Sunday night, drawing Mombaerts' praise.

"Rostyn did very well. He was one of our best players. [There is] no need to change something sometimes.

"Rostyn is also very good on the ball. He is calm, it was my choice for this game, but every game is another game," he said.

Mombaerts had better news of another injured centre-half in Scottish international Jack Hendry, who sustained knee ligament damage in just his second game for the club after moving from Glasgow giants Celtic in the January transfer window.

"Jack is getting better. I hope we will see in five or six weeks but I can't say this [for sure]. He is in first rehabilitation phase," the Frenchman said.

Mombaerts was also delighted for captain Scott Jamieson, who got a win on his landmark 250th appearance in the A-League.

"We have a very good relationship. He tries to understand what we are trying to set up, he's very involved with the club and with the young players we have."

City are now three points clear of Perth and Wellington in second spot and face a testing trip to WA next week with Glory looking to bounce back from their loss in Newcastle on Saturday night.

Mombaerts believes that City are on the right track as they approach the business end of the season.

"It was a tough game. We did very well in the first half, we created some good chances. Second half maybe our high press was not effective enough and we let Brisbane be dangerous.

"We didn't concede a goal but they were very dangerous from free kicks.

"Our ball circulation was effective in the first half. They had to run a lot and we need to improve our penetrating runs but it was good.

"Our reaction when losing the ball was perfect. It is very important to correct our defensive transition but I am very happy with this."

Meanwhile, Brisbane boss Robbie Fowler felt his team could have got something out of the game, but reserved his main criticism for the match officials.

"The referee and the fourth official, the consistency they show is not good enough. The amount of people who come up to me and query the A-League and a lot of them just say the standard of the referees needs to be better.

"Some of the decisions tonight were quite poor. The free kick for the goal, our player has won the ball," he said.