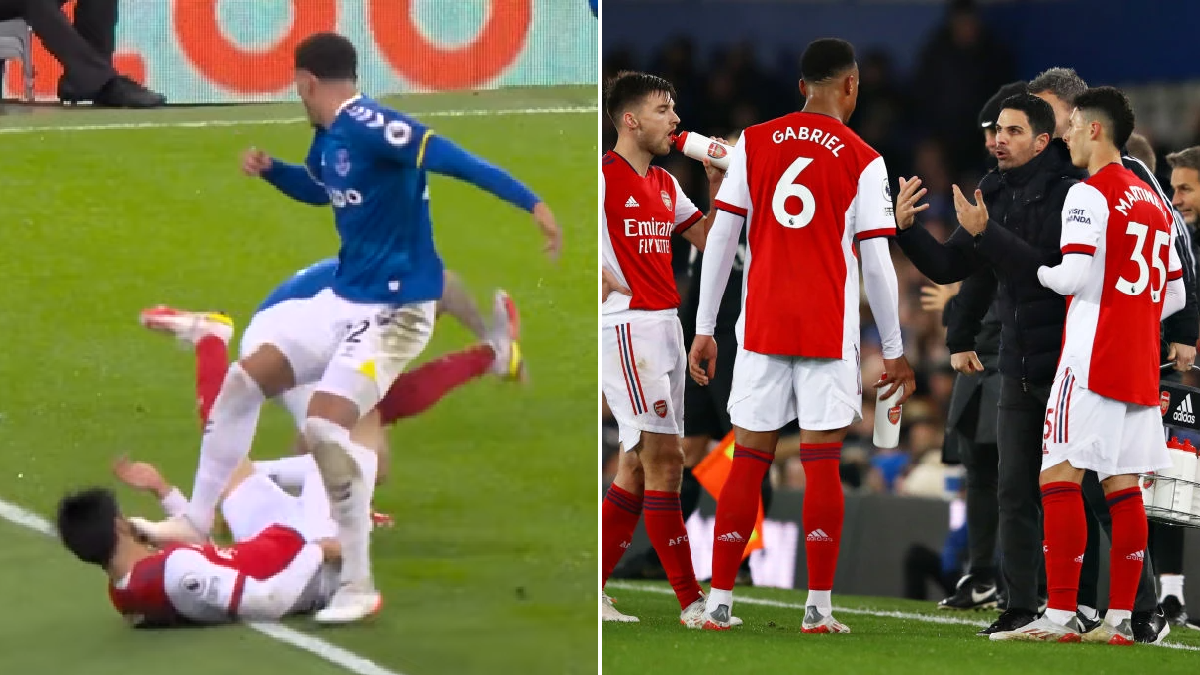 Mikel Arteta has slammed Arsenal’s ‘sloppy’ performance in Monday night’s Premier League defeat to Everton, while he played down the significance of Ben Godfrey’s clash with Takehiro Tomiyasu.

The Gunners took the lead at Goodison Park on the stroke of half-time just moments after Everton had a goal ruled out by VAR for offside, with Martin Odegaard stroking a neat volley beyond Jordan Pickford.

But Arsenal were very passive in the second half as Everton grew into the game before Richarlison, who had a second effort disallowed, finally netted with a brilliant header after Demarai Gray’s shot rebounded off the crossbar.

Both sides pushed for a winner late on but it was Everton who grabbed all three points thanks to Gray’s superb individual effort, sending a venomous long-range shot crashing in off the bar.

Arteta was hugely disappointed with the nature of his side’s defeat afterwards and felt the game had been theirs for the taking but the side did not play with enough precision going forward.

Asked if Arsenal met the standards he expects, Arteta told Sky Sports: ‘No. In the first half we were very inconsistent with the ball.

‘We had control of the game, we didn’t concede anything apart from the set-piece [that was disallowed], but I didn’t like [the performance].

‘No penetration, no threat, totally the contrary of what we try to do. And one of the few times that we’ve done it [right] we score the goal from Martin, we were 1-0 up.

‘Second half we tried to do more of the things, again being very inconsistent in that aspect, created four big chances: one for Eddie Nketiah, two for Martin, and one at the end for Auba.

‘But we conceded a very sloppy goal. The first one, when you have to manage the game, and it’s not enough to win the game.’

Asked what the issue was, Arteta added: ‘We couldn’t take the ball into the final third, we kept giving the ball away!

‘Sloppy passes, sloppy touches, and they’re not going to give you that time. And at Goodison you know what you have to expect and the spaces were there and it wasn’t good enough.’

Everton were fortunate to finish the match with 11 men with Godfrey appearing to stamp on Tomiyasu midway through the first half, leaving the Japanese defender with a nasty stud mark on his face, but Arteta did not want the incident to detract from his side’s poor display.

Asked if Godfrey should have seen red, Arteta added: ‘I don’t know. That decision is made. I’m sure the VAR reviewed it. What I want is more from my team.’