The fan group blamed for the violent pitch invasion at a Melbourne Victory match last year is planning to return to AAMI Park on Australia Day, despite restrictions that prevent members from sitting in their unofficial stand.

In a statement posted on the group’s Facebook and Instagram pages, Original Style Melbourne (OSM) announced its pending return for the match between Sydney FC and Victory on Thursday. 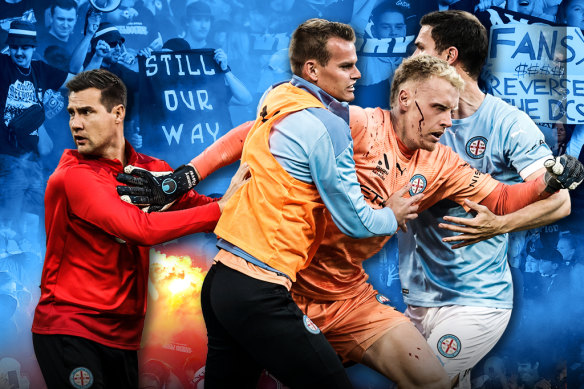 The active supporter group behind last year’s pitch invasion are set to return to AAMI Park on ThursdayCredit:The Age

“Just like in years gone by, our presence remains a constant despite results on the pitch, and restrictions in the stands,” the message said.

If the OSM does return, it will be its first appearance at a Victory game since its match against Melbourne City on December 17 was marred by a violent pitch invasion that later saw the club fined $550,000 and handed a suspended 10-point deduction until the end of 2025.

The sanctions were imposed after 150 fans stormed the pitch at the A-League derby between, resulting in dozens of arrests and damaging international headlines for the sport.

Because access to seating behind the goals at the northern end of AAMI Park – which is unofficially considered OSM’s home – has been blocked for the rest of this season, and the finals series, the group told its fans to buy tickets in a different bay.

“For this match, if you would like to watch the game together with your mates and the rest of the terrace, and not be separated within the active area – we suggest buying tickets in bay 33 to start, and then to bays 34/35 should it be necessary,” they wrote.

“We’ve accepted everything that’s been handed down to us, and we’re just looking forward to moving from here and rebuilding everything we can to still bring the colour and noise and everything that makes Melbourne Victory and football unique to our games, but to make sure we do it in a way that is safe,” Carnegie said.

Despite the fallout, OSM announced it would not disband: “Our group was formed independently, and only we control our future.

“The current restrictions on support are nothing the terrace hasn’t dealt with and overcome before. As long as fans are allowed inside the stadium, we will be there and our voice will be heard.”