Melbourne City have fired a warning shot to the A-League Men competition and earned a slice of revenge for last season’s grand final defeat with a 2-1 win over Western United in their season opener. 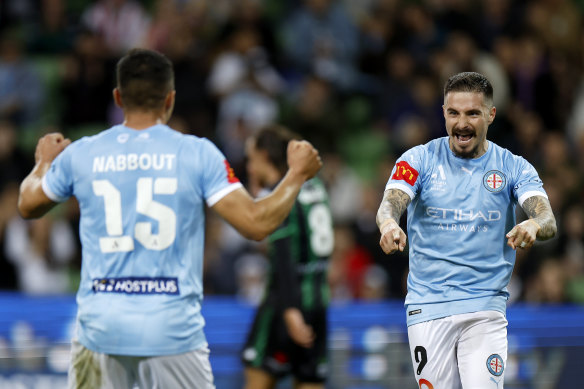 The Swiss centre-back and Tomoki Imai combined for a calamitous own goal in the 38th minute, while Jamie Maclaren pinched the ball off Lacroix for City’s second in the 59th.

City’s attacking press was exceptional while new signing Valon Berisha and Socceroos winger Mat Leckie looked a class above throughout at AAMI Park.

United recruit James Troisi forced a good, low save from Tom Glover in the opening minute.

In the 13th minute, Maclaren tapped home at the back post but after a VAR referral, referee Shaun Evans controversially struck out the goal, ruling Berisha had gone into Ben Garuccio’s back in the lead-up.

Andrew Nabbout headed a Leckie cross on target and Imai’s header off the line went straight up in the air.

Then, in another attempt to clear the ball, Lacroix headed the ball into Imai and over the line.

Maclaren doubled City’s lead 14 minutes into the second half when he caught Lacroix dawdling on a pass, nipped the ball away and coolly scored.

Imai was substituted off with an upper body injury at half-time while new City signing, defender Thomas Lam, was forced off in the 65th.

Milanovic provided an injury-time highlight when he chested the ball down and rifled it into the bottom corner.