Mauritania 0-1 Gambia: Jallow scores as Gambia start with a win

Mauritania 0-1 Gambia: Ablie Jallow hits impressive strike as Gambia get off to winning start in Africa Cup of Nations with their first ever goal in the competition

Gambia’s Ablie Jallow scored early as they made an impressive African Cup of Nations debut by beating Mauritania 1-0 in their Group F opener.

Jallow struck with a left-footed effort from the edge of the penalty area to put Gambia ahead after 10 minutes in their first game at the finals.

There were also good second-half chances for the small west African country, one of two debutants in the 24-team field for the tournament in Cameroon. 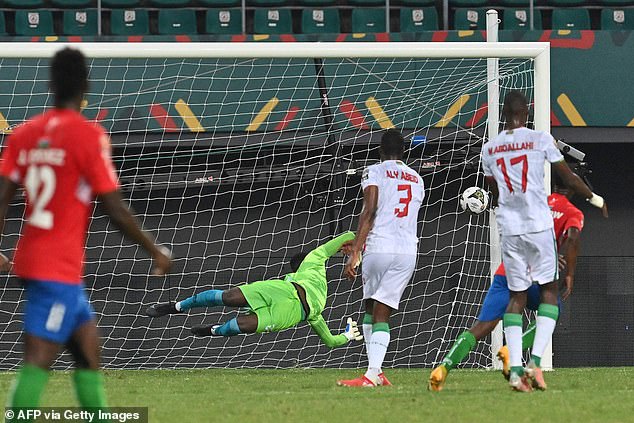 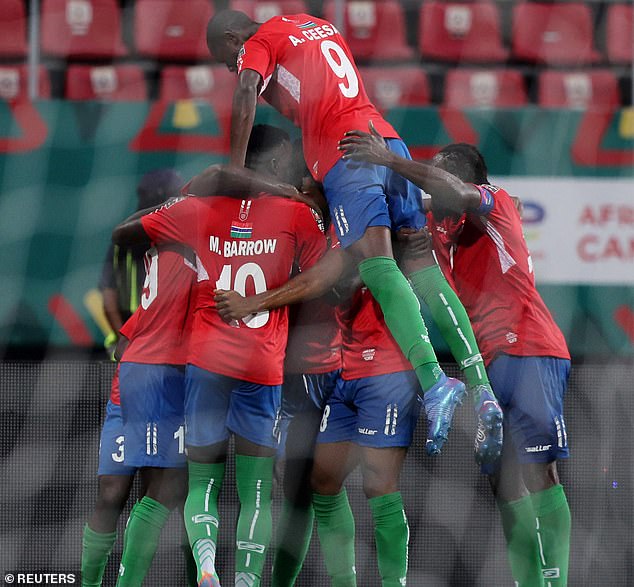 The Gambia players celebrate following Jallow’s goal, which was scored in the tenth minute

Gambia are joined at the top of the group standings by Mali, who edged Tunisia 1-0 in Limbe earlier on Wednesday in a controversy-filled encounter.

Jallow was set up by a swiftly-taken setpiece from Musa Barrow, catching out the Mauritania defence and giving the new boys a perfect start.

With much tougher group games to come against Mali and Tunisia, Wednesday´s outcome was always going to be important for both Gambia and Mauritania´s hopes of advancing.

The top two teams in each of the six groups, plus the four best third-placed finishers, advance to the round of 16. After the break, Sulayman Marreh and Sampdoria defender Omar Colley both failed to score with good headed chances from set pieces with Marreh missing from in front of goal and Colley powering his effort inches wide of the post.

Mauritania appealed for a penalty with some 15 minutes left but it was turned down by VAR.

Gambia´s next game is against Mali in Limbe on Sunday, followed by Mauritania against Tunisia in the same stadium.