Matildas goalkeeper Lydia Williams is set to leave the W-League at the end of this season after announcing her intention to move to Europe before the 2020 Tokyo Olympics.

The 31-year-old parted ways with American club Reign FC on Monday and said her tenure at Melbourne City will almost certainly end after this W-League campaign, with her sights set on joining the growing Australian exodus to Europe. 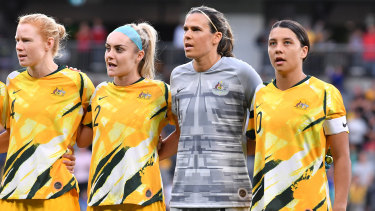 Lydia Williams is set to move to Europe.Credit:AAP

The opportunity to spend a season at just one club instead of bouncing between USA and Australia each year is a major motivation for Williams, who is looking to join Matildas' teammates Sam Kerr, Caitlin Foord, Lisa De Vanna, Chloe Logarzo and Emily Gielnik in Europe.

"My agent is obviously in contact with a few options for me. I guess it’s obvious I am not going to be going back to the States so that leaves Europe as the next valid [continent] I guess," she said. "There are some moves for me there. It’s been six years that I have been in the US so quite a long time going back and forward between the W-League and there. I feel like Europe is the next place to go as a player."

Her exact destination remains to be seen, with Williams remaining tight-lipped on her next move, revealing only that it won't be a return to Sweden where she played seven years ago.

"There are a few countries, I can’t give anything away yet but not Scandinavia. That’s the one thing I can say," she said.

Williams arrived in Vietnam over the weekend ahead of the second leg of the Olympics qualifying play-off. Australia are all-but assured of a spot in Tokyo after thrashing Vietnam 5-0 in Newcastle on Friday night, needing only to avoid a heavy loss of six goals or more to the unfancied Vietnamese on Wednesday night to progress.

While the players aren't looking too far ahead, Williams says Australia needs to better their performance in Rio de Janeiro in 2016 and reach the semi-finals if they're regard the Tokyo games as a successful tournament. Australia lost on penalties to hosts Brazil in the quarter finals four years ago and while a medal is the ultimate goal, Williams believes reaching the final four should be their first benchmark.

"We will always want to do better than previously. Just qualifying is big for us, barring the last time for Rio, it took us three turns to try and get there," Williams said. "To qualify again will be amazing and actually going to Tokyo and performing her will be great. Obviously we want to get to medal chances but it’s really one game at a time."