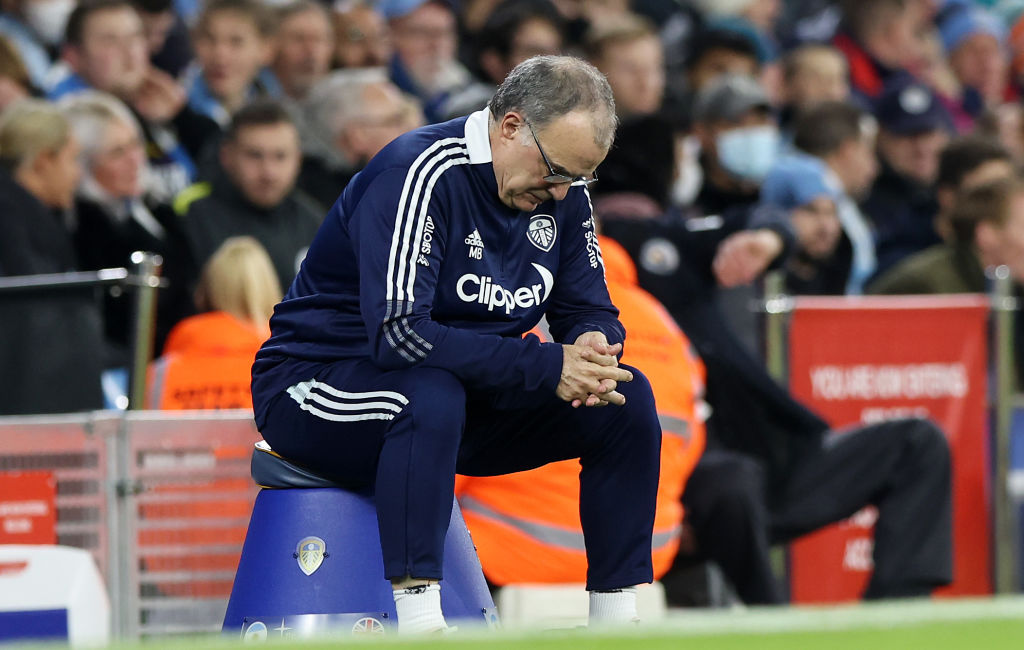 A despondent Marcelo Bielsa said he simply had ‘no justification’ to offer after his Leeds side were thrashed 7-0 by Manchester City, the joint-heaviest defeat in the club’s history.

The defending Premier League champions were at their frightening best and got off to the perfect start as Phil Foden and Jack Grealish both netted to present Leeds with an almighty uphill battle after only 13 minutes.

Kevin De Bruyne struck either side of Riyad Mahrez’s 49th-minute effort, with the Belgian in supreme touch on his return for City, and John Stones and Nathan Ake joined the party late on to send the Etihad into raptures.

Pep Guardiola’s men have now won all but one of their last ten matches in all competitions and the result saw them take a four-point lead over second-placed Liverpool at the top of the table.

Tuesday night’s visitors, meanwhile, remain stuck down in 16th place after a miserable run of just one victory in their last seven matches in the English top flight.

With Leeds hovering just five points above the relegation zone, Bielsa felt there were no excuses and nothing to be ‘valued’ from their limp performance against City.

‘There is nothing positive to take away from our performance. I can’t find anything that can be valued,’ the Leeds head coach told BT Sport shortly after the final whistle.

‘As a result, as is natural in these cases, when there is nothing that is well done, it’s not the individualities that fail, but the conduction and the organisation.

‘There is no justification I can offer. The game was exactly how we thought it was going to be.

‘We prepared ourselves to avoid everything that happened and we didn’t manage to get everything so that the superiority wouldn’t be so noticeable.’

At his post-match press conference, Bielsa claimed Leeds’ display was the worst he had seen since taking charge at Elland Road back in 2018.

‘The problems were at all the levels,’ the Argentine told reporters.

‘All the solutions that we implemented were insufficient and it’s not that City played very well, it’s a lot more noticeable how badly we played than how well City played.

‘City plays like this all the time or similar to it, but we have never played so badly in these four years.’

De Bruyne has endured a frustrating start to the season after testing positive for Covid-19 to add to his injury problems, but the midfielder completed his brace in style with a thunderous strike just past the hour-mark in Manchester.

On City’s emphatic win, De Bruyne said: ‘I just think we played really well as a team. We started really well and we found the openings at the right time.

‘It’s been a great game for us. A lot of different guys scored, it gave confidence to everyone.

‘It [goal difference] is not something we should think about at the moment. We just need to perform well and try to win.’

The Belgium international – who was making his first start since November’s Manchester derby – said the thumping victory acted as a ‘booster’ ahead of City’s busy winter schedule in the Premier League.

‘A lot has happened this year, a little bit out of out of my control,’ he added.

‘The only thing I could do is work hard and come back as quick as possible.

‘It’s unfortunate with everything that has happened and at the time I was coming back I got Covid. It happened and now we are working hard to come back to a good level.

‘I think we played incredibly well, especially against the way they pressed. We found the right times to attack them.

‘When were were 3-0 or 4-0 up it gets tough for them and they tried to keep it tight in the second half, but we had a lot of chances to score more.

‘It’s good for everybody, a lot of people who maybe didn’t play a lot played today and chipped in. For the whole team it is a booster.’