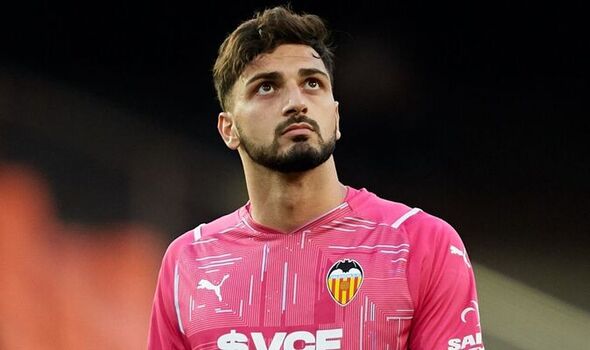 Manchester United have reached out to discover the availability of Valencia goalkeeper Giorgi Mamardashvili, according to reports in Spain. Erik ten Hag and the Old Trafford hierarchy are now beginning to get to work on shaping the Dutchman’s new-look squad for the 2022/23 campaign and there could potentially be changes to the club’s goalkeeping set-up.

David de Gea has fought his way back to cement his status as United’s No 1 but in reserve, there could be a shake-up this summer.

Dean Henderson’s future remains unclear with the England international now keen to play regularly to get his World Cup bid back on the track.

But now United are seemingly exploring the possibility of signing a new goalkeeper with Mamardashvili one of the names of interest.

Spanish newspaper AS claim the Georgian international has received a phone call from Manchester United, who are looking to determine the financial conditions of any deal.

Mamardashvili, who is just 21, made 18 appearances in La Liga, keeping eight clean sheets.

Now there’s a feeling one of the revelations of last season’s Spanish top-flight could be set to earn a big move this summer, with United probing.

His current release clause is believed to be worth in the region of £16million.

However, Los Che are now keen to tie their highly-rated shot-stopper down to a new, improved contract that includes a bigger release clause.

The Spanish side are under continued financial pressure though and could therefore consider offers in the region of £10m.

Their stance provides United with an incentive to formalise their interest, should Henderson move on.

Ten Hag also has former Aston Villa and Burnley goalkeeper Tom Heaton in his squad but he has remained United’s third-choice since returning to Old Trafford.

Former United academy graduate Sam Johnstone is another name that could fall under consideration.

West Bromwich Albion have now confirmed Johnstone will depart The Hawthorns on a free transfer when his current deal expires in June.

United are currently focused on resolving the more pressing issues within their squad following the imminent departure of five senior outfield players.