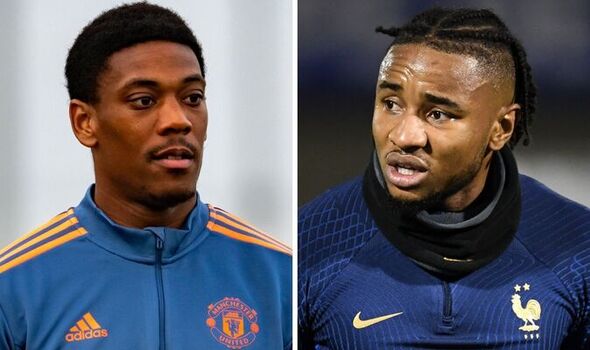 Manchester United forward Anthony Martial has been overlooked for a third time by France boss Didier Deschamps, who has been forced to make another late change to his World Cup squad following an injury to Christopher Nkunku in training. The RB Leipzig forward, who scored 35 goals and registered 20 assists in all competitions last season before winning the Bundesliga Player of the Year award, picked up a problem with his left knee following a firm tackle from Eduardo Camavinga that left his team-mate in a heap on the turf.

Eintracht Frankfurt attacker Randal Kolo Muani is now set to replace Nkunku having been involved in 20 goals in 23 appearances this season with the reigning Europa League champions (8G, 11A) after joining from Nantes on a pre-contract agreement.

Kolo Muani is set to jet to the Middle East from Japan, where he has been taking part in a commercial trip with Eintracht after netting in their final Bundesliga match before the mid-season break against Mainz last Sunday, which ended in a 1-1 draw.

Martial’s chances of making the cut were already looking slim having not been called up by Les Blues for over a year when he was named on the bench for the Nations League semi-final and final against Belgium and Spain, respectively, as France lifted the trophy.

Prior to that, he was snubbed at the European Championship before also missing out on the initial 25-man World Cup squad named by Deschamps last week.

The France boss purposely left one more space within his squad to give himself some extra thinking time before Martial was overlooked once again for Borussia Monchengladbach’s Marcus Thuram.

Manchester United head coach Erik ten Hag remains a big fan of Martial, who was handed a start in the Premier League on Sunday at Fulham in the absence of Cristiano Ronaldo as the Red Devils bagged a last-gasp winner in the 2-1 triumph at Craven Cottage.

But having only featured five times this season in the top-flight – scoring twice – Deschamps was seemingly unconvinced that Martial was operating at the required level to make his squad.

Meanwhile, Nkunku’s injury problem will now sound alarm bells at Chelsea, who are thought to be close to sealing the signing of the versatile Leipzig attacker having already conducted a medical on the player this summer.

France have confirmed the issue is just a sprain after publishing the following statement on the 25-year-old: “Injured in training, Christopher Nkunku must give up participating in the World Cup. The whole group shares Christopher’s sadness and wishes him a speedy recovery.

“Nkunku had left the training session before its end, injured in the left knee. The radiological examinations taken in the evening unfortunately revealed that it was a sprain…”

Chelsea are believed to be on the cusp of clinching the signing of Nkunku after he signed a new two-year contract with Leipzig earlier this summer.

The deal is believed to contain a £52.4million release clause that kicks into action at the end of the current season.

Ideally, Chelsea would like to negotiate a cheaper figure although it’s understood they would be willing to meet the clause in order to complete the signing of the former Paris Saint-Germain forward, who previously played under both Thomas Tuchel and Unai Emery.

Todd Boehly was keen to wrap up the capture of Nkunku before the World Cup in anticipation that he would light up the tournament with France.

Manchester United and Manchester City have both shown interest in the player before Chelsea decided to push ahead with a deal.

His impending arrival at Stamford Bridge is expected to spell trouble for the likes of Hakim Ziyech and Christian Pulisic, who are already struggling for minutes under Graham Potter.