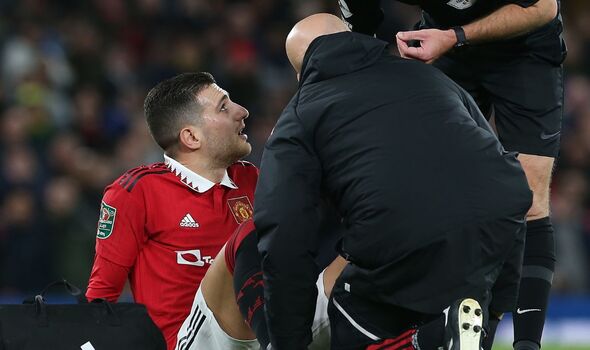 Diogo Dalot was taken off as a precaution in Manchester United’s 3-0 Carabao Cup quarter-final victory over Charlton on Tuesday night, posing fresh doubt over the prospect of Aaron Wan-Bissaka leaving Old Trafford this month. Heading into the transfer window, the £50million 2019 signing looked destined to move on but with the Red Devils seemingly no closer to landing a replacement, it would be no surprise to see the tough-tackling full-back stay put.

Wan-Bissaka wants to play more regularly but Dalot has nailed down the right-back spot under Erik ten Hag, building on the huge strides he made under interim boss Ralf Rangnick.

But despite his struggles, the ex-Crystal Palace star showed huge resilience during the mid-season break to earn the trust of Ten Hag – despite a brief wobble in the friendly defeat to Cadiz.

A hamstring problem for Dalot saw Wan-Bissaka start all three of United’s festive Premier League matches as they recorded three victories without conceding a goal.

He also caught the eye against Burnley, registering an assist and contributing to another clean sheet before making sure of the shutout against Charlton.

Ultimately, Ten Hag is currently reaping the rewards of having a capable deputy option on hand to step in and deliver when first-choice Dalot isn’t fully fit.

That hasn’t always been the case this season when Wan-Bissaka has sometimes been overlooked by the Dutch tactician, particularly in the Europa League when handing out rare minutes to his fringe players.

But now United are in a catch-22. They would need to spend money on a replacement before agreeing to Wan-Bissaka’s departure and options are currently sparse.

Furthermore, while there is interest in the likes of Denzel Dumfries and Jeremie Frimpong, both would cost a considerable amount of money.

United are believed to be short of cash this month following an excessive transfer splurge in the summer to mark the arrival of Ten Hag.

Truthfully, there isn’t a burning need to offload Wan-Bissaka but the player understandably wants to play regular football again after losing his place in the side.

Wolves and West Ham are thought to hold concrete interest in singing the right-back this month.

West Ham launched a late move in the summer but United would not agree to his departure without signing a replacement.

Now they probably have the time to find one but with Dalot nursing a minor fitness problem, there is simply no chance United are ready to do business given it could leave them with no fit options at right-back.

Ten Hag has, however, eased fears Dalot could be facing a lay-off by stating the injury is not thought to be serious.

“He went off before half time, we have to wait. I think it’s not serious, but it was a precaution, to get him off, and to not take a risk ahead of Saturday’s important game [against Man City],” the United head coach said.

Wolves are thought to be the most serious about signing Wan-Bissaka as they prepare a potential loan approach but United are likely to hold firm, particularly with their defender currently delivering strong contributions on the field.