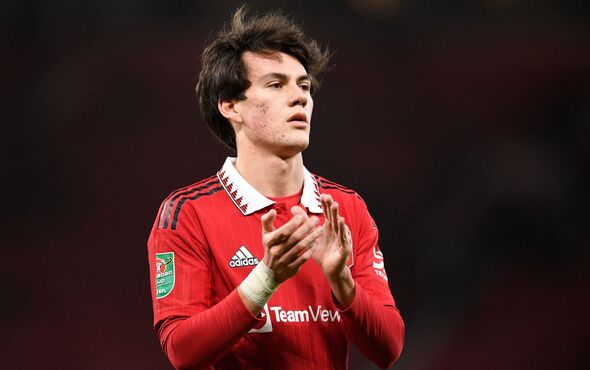 Facundo Pellistri’s agent has reportedly flown into England to hold talks with Manchester United over his client’s ‘immediate future’ at the club. Pellistri joined United back in 2020 before being shipped out on loan to Deportivo Alaves.

He was kept at Old Trafford this season by Erik ten Hag, who wanted to keep a close eye on the Uruguayan’s progression. But the 21-year-old has been frustrated in his attempts to break into Ten Hag’s squad.

Prior to his debut against Charlton, Pellistri had to make do being an unused substitute on several occasions. United fans finally got a glimpse of the winger in action against Charlton, featuring for just six minutes.

But Pellistri impressed in that short amount of time, providing the assist for Marcus Rashford’s first as well as being involved in United’s third. Speaking after the match, Pellistri set his own targets to be involved more with United in the near future.

“Yes of course [I was eager to get his debut vs Charlton],” he said. “I am very happy, and I want to help my team-mates to achieve all the trophies that we have in mind and to win every game we have because this is an incredible club and very big.

“All players want to play and of course I want more. I will fight and train hard to continue this way.” But the Telegraph indicate that he could spend the remainder of the season out on loan with a move to the Championship touted.

It’s claimed that Watford are leading the race to sign Pellistri should United indicate that they’re willing to let him leave on loan. The report adds that Pellistri’s agent, Edgardo Lasalvia, has ‘flown to England’ to discuss his client’s future at the club.

While Pellistri impressed on loan at Alaves, United reportedly want to see Pellistri playing regular minutes in the second tier of English football. Ten Hag will have the final say, but the Dutchman certainly sees a future for the Uruguay international at Old Trafford.

“He’s come on and had an effect so that’s the next step. I say well done, better, and keep going.”