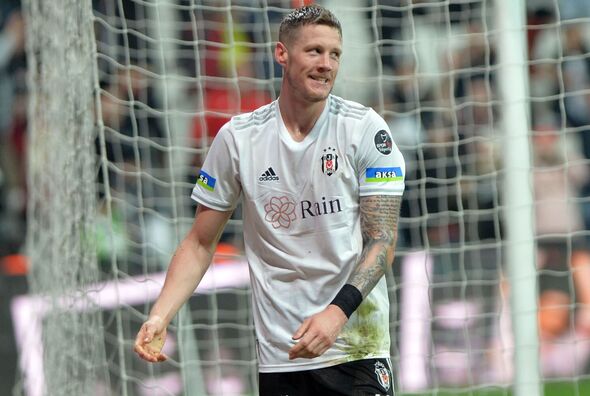 Manchester United have reportedly reached an agreement to sign striker Wout Weghorst. The Red Devils are close to completing a tricky deal for the Holland star, who is on loan at Besiktas from Championship outfit Burnley.

Besiktas have been unwilling to lose the 30-year-old, who did not have a recall clause in his temporary deal. The Turkish giants were demanding a hefty compensation fee to allow him to return to Burnley so that a move to United could be completed.

United have apparently agreed that a £2.6m (€3m) fee will go to Besiktas to facilitate a move. Weghorst will then join the Old Trafford outfit on loan for the Clarets, for whom he underwhelmed in their relegation campaign last year.

However, Besiktas have insisted that they source a replacement before allowing Weghorst to travel to England. Former player Vincent Aboubakar has been linked with a third spell at the club having fallen out of favour at Saudi Arabian club Al-Nassr due to the arrival of former Red Devils star Cristiano Ronaldo.

That is according to transfer expert Fabrizio Romano, who reports that a full verbal agreement is in place between United, Besiktas and Burnley. Besiktas will then fully approve the deal when a replacement for Weghorst is found.

Once finalised, Weghorst will join United on loan from Burnley until the end of the season. Erik ten Hag wants the striker on a short-term deal to replace Ronaldo following the iconic forward’s axing in November.

For his part, Weghorst has been desperate to complete the dream move and angered Besiktas officials by waving to the club’s fans last weekend. He scored in a 2-1 win over Kasimpasa and appeared to mouth the words ‘bye-bye’.

“I don’t understand why Weghorst said goodbye to the fans, why he made such a move. He is our football player right now. Our contract expires at the end of the season.

“If Manchester United or any other team wants Weghorst, they will meet with Burnley anyway. Burnley will then contact us and discuss the terms of separation. If we accept, the contract will be terminated. Otherwise, it will go on until the end of the season.

“He can’t just go. There will have to be a reward for us to approve the separation. I’ll give an example. If Burnley told us, ‘We made a deal with this team for Weghorst, we will give you half of the transfer fee’, this may be a different condition. Then we’ll sit down and talk.”

Burnley signed Weghorst last January in a reported £12m transfer from Wolfsburg. He was supposed to fire them towards safety but the Clarets soon sacked their long-serving and successful head coach Sean Dyche, which was the catalyst for their eventual relegation.

Weghorst scored just two Premier League goals in his five months at Turf Moor. He has enjoyed much more successful form in Turkey, bagging netting 10 times in the top-flight. There was also the infamous last-minute equaliser in Holland’s World Cup quarter-final clash with Argentina, which his side eventually lost on penalties.