Manchester City head to Old Trafford on Sunday afternoon to face Manchester United in the Premier League. Former centre-back Sylvain Distin has urged Pep Guardiola’s side to get the job done against their fierce rivals, in what would be the fourth Manchester derby of the season.

City lost the reverse fixture against United at the Etihad Stadium, back in December.

A quick-fire double from the Red Devils helped United to a 2-1 win against Pep Guardiola’s side, in what was a hammer blow to City’s chances of catching up with Liverpool in the title race.

But, with United now desperate for three points to remain in the hunt for a place in the top four, Guardiola has a chance to avenge the defeat.

Although City have nothing specific to play for, other than pride, Distin has urged his former side to leave Old Trafford with a win. 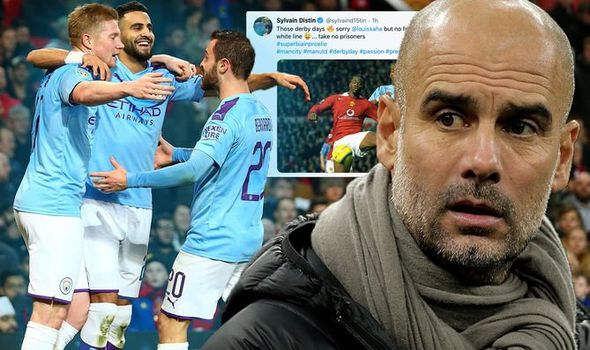 He joked that there’s no place for friendships on derby day, while also demanding that City get the job done.

“Those derby days.” tweeted Distin, along with a picture of himself tackling Saha in a derby clash.

He’s 79th in the all-time list of most appearances for the Citizens, having played 206 games for the club.

Distin scored six goals during his stay at City, while also providing a single assist for team-mates.

Following his spell at Eastlands, he moved to Portsmouth for two years, before spending six seasons at Everton. 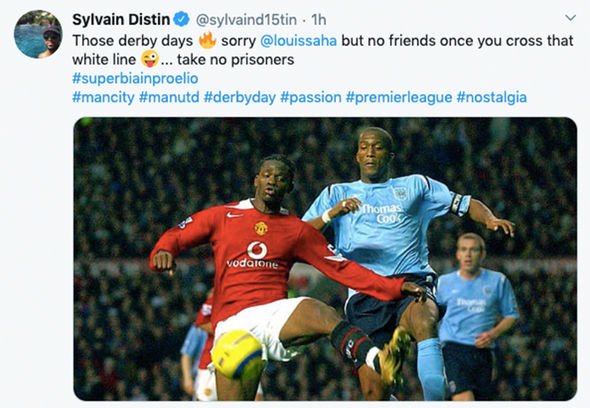 Meanwhile, ahead of the derby, Guardiola admitted that he has been surprised by the gap in quality between both City and United.

City are currently 15 points ahead of United in the Premier League table.

The Red Devils also haven’t finished above City in the league since they last won a Premier League title, back in 2013.

“I never expected to have this gap between us and United in these three or four years,” said Guardiola.

“I’ve no doubt about the quality of United and I appreciate the manager [Ole Gunnar Solskjaer], he represents them in an exceptional way.

“United are working to improve and get closer to the people above them but Manchester City wants to improve also and the distance is what it is.”

United will be hoping to complete a league double over their cross-city rivals for the first time since the 2009-2010 season.

But only on one occasion in the past seven meetings has the home side come out on top.