Chelsea thrashed Reading 5-0 on the final day of the FA Women’s Super League to be crowned champions after a superb season in which they lost only once.

Manchester City finishing second, while Bristol City were relegated. City won their final game 1-0 at West Ham, but to leapfrog Chelsea they needed the Londoners to lose. 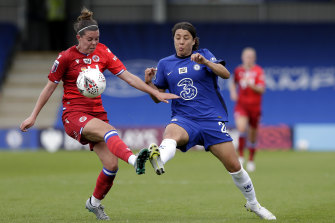 Knowing a win would secure the title, Chelsea’s Melanie Leupolz got the party started by scoring from a clever corner in the second minute, and Fran Kirby combined with Sam Kerr to strike just before halftime.

The Kerr-Kirby pairing struck again 12 minutes into the second half as the Australian teed up Kirby to take a touch and lash a powerful shot past Reading goalkeeper Grace Moloney.

Kirby returned the favour in the 71st minute, lofting a pass for Kerr to volley home her 21st league goal of the season to secure the Golden Boot award.

Substitute Erin Cuthbert bundled home a fifth to make it a bittersweet end for Reading’s Fara Williams, who was playing the final game of a storied career that began at Chelsea and spanned two decades in which she became England’s most-capped player.

Chelsea have already won the Community Shield and the Continental Cup. They play Barcelona in the Women’s Champions League final on May 16 and are into the last 16 of the Women’s FA Cup.

Arsenal bagged the final Champions League qualification spot in third place on 48 points, one ahead of Manchester United.

There were sighs of relief for Aston Villa, who drew 0-0 with Arsenal, and Birmingham City, who lost 1-0 to Tottenham Hotspur, as Bristol City were the one team relegated to the Championship following a 3-1 defeat by Brighton & Hove Albion.