The Blues defeated Arsenal 2-1 in front of a record final crowd of 6743 at Nottingham Forest's City Ground on Saturday.

The Gunners, who Kerr's national teammate Caitlin Foord started for and are managed by Australian Joe Montemurro, are the record five-time winners and have now lost the past two finals. 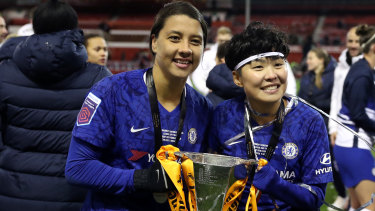 However, Kerr beat her defender to help conjure an opening in the second minute of five added on, which resulted in England stabbing home her 21st goal of the season.

It was heartbreak for Arsenal who had dominated the game despite being without a number of key players through injury, to such an extent Montemurro could only name five substitutes rather than the regulation seven.

After losing to Chelsea twice in the league this season, including a humbling 4-1 home defeat in January, the writing appeared to be on the wall for the Gunners when England grabbed an early opener.

Guro Reiten's cross was met at the far post by a header back into the danger area by Maren Mjelde, with England turning onto a loose ball to fire home from eight yards as the Gunners failed to clear.

Arsenal had the better of the game and openings only for Blues goalkeeper Ann-Katrin Berger to keep them at bay. 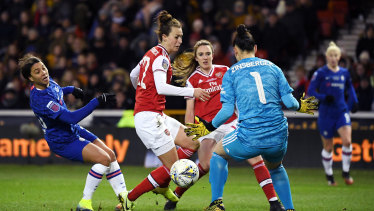 Kerr has a shot saved by Arsenal goalkeeper Manuela Zinsberger.Credit:Getty

Foord teed up an opportunity in the first half before she went close with an effort that rifled into the side netting.

The Gunners controlled the game in the second half and after going close on more than one occasion eventually equalised with academy product Williamson scrambling home from close range.

Yet it was England that settled the game as she was on the end of a move that started with Kerr managing to evade her marker and play in Erin Cuthbert for a cross.