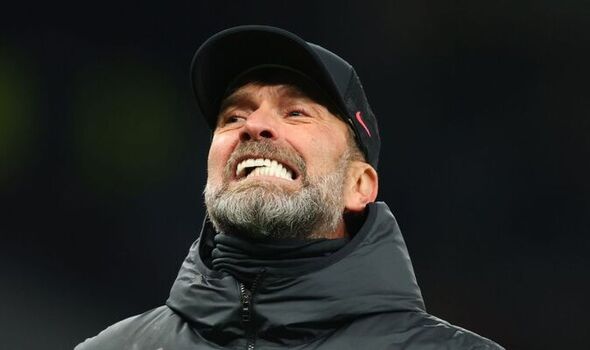 Jurgen Klopp has warned Real Madrid that Liverpool “have Anfield” as they look to upset the odds against Los Blancos in the last 16 of the Champions League. The two sides will lock horns against one another in February in a repeat of last season’s final – which Carlo Ancelotti’s side won 1-0 in Paris.

Real Madrid have continued where they left off this season as they are yet to taste defeat in La Liga whilst they also topped their Champions League group.

Meanwhile, it’s been a mixed bag for Liverpool who have endured their worst start to a season since the appointment of Klopp but there is optimism the 2-1 win at Tottenham can help them turn the corner.

The German is now relishing the chance to carry out revenge for his side’s final heartbreak last season and he is confident the power of Anfield could prove to be of huge significance over the course of two legs.

“The first thing that we can say about this draw is it is proper Champions League. This is a tie that speaks for itself and one that we should all be excited about,” Klopp told Liverpool’s official website.

“I know we have played Real Madrid in a couple of recent finals but it is not so often that our two clubs have met in a two-legged tie so now we can look forward to this happening.

“Real’s European record is the best around. We know this. But we also know that ours is not too bad. On top of this, we know that we have Anfield and everyone knows what this means.

“It is a really good draw. A really exciting draw. The games themselves are still a few months away but it does not take a great deal of imagination to think what the atmosphere will be like at both games.

“There is a lot of football to be played before this, of course, so we will focus on each game as it comes but yes, this draw has given us something special to look forward to.”

The draw was reportedly met with ‘content’ in the Real Madrid dressing room, according to Spanish broadcaster Jose Luis Sanchez.

It will be the third successive year that Liverpool and Real Madrid have played against each other in the Champions League after Los Blancos also knocked the Reds out in the 2020/21 quarter-finals.

This is a very different Liverpool side though having since lost Sadio Mane and Gini Wijnaldum – both of whom were regular starters for the Reds.

Now they have Darwin Nunez in attack, while Luis Diaz and Diogo Jota both featured in last season’s final in the French capital.

Real Madrid have also lost dependable midfielder Casemiro to Manchester United but they have already seemingly replaced him in the form of Aurelien Tchouameni – a mega-money summer signing from Monaco.

The club’s director Emilio Butragueno is in agreement with Klopp that this will be a historic tie on the basis of the two team’s achievements in Europe, telling Movistar: “We are going to play in February and it is a champion club. It has a stadium that pushes a lot. It is going to be a very difficult rival, but we are Real Madrid.

“It’s a repeat of the last final. They are two historic teams. It’s going to be an electric and fascinating tie for the fans. We’re going to live it with all the enthusiasm. Logically we are the champion team and we’re going to try to defend that condition, aware of the rival we are going to have in front of us.”