Home » Soccer » How ready are second-tier clubs to step up to a national league?

How ready are second-tier clubs to step up to a national league?

The creation of the national second division for the A-League – and whether and how soon there is promotion and relegation – sparks more debate among the game's aficionados than almost any other topic.

Football Federation Australia has had a working party trying to come up with a program for some time and has yet to release its findings, perhaps an indication of how many issues need to be resolved before a workable solution can be found.

Whether that will satisfy all interests remains a moot point: this is soccer, after all, a game with an ability to take infighting and internecine conflict to levels hitherto unknown in Australian sport.

But outside of the committee rooms the show goes on, and the National Premier Leagues, the competition where many of the participants in the mooted second division play, are getting under way. 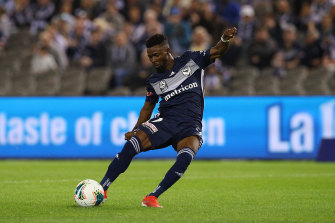 Elvis Kamsoba is one of the players who have progressed from the NPL. Credit:Getty Images

Peter Filopoulos, the chief executive of Football Federation Victoria, says the NPL in this state has become a ''destination league'' for players outside the A-League and for those hoping to impress A-League coaches around the country.

And certainly it contains several clubs – principally South Melbourne, Melbourne Knights and Heidelberg United, who have long histories in the game and were previously part of the National Soccer League.

But with a higher profile comes increased scrutiny. The league's image was tarnished in the lead-up to the seasonal kick-off earlier this month with reports that former NSL powerhouse South Melbourne has drawn the ire of world soccer's governing body FIFA for not paying a former coach, Chris Taylor – a matter South is appealing against.

It's the sort of publicity the club and the division could have done without.

The league has taken action to ensure that any similar complaints which might arise about non-payment by players will be the subject of  a grievance procedure, with the Professional Footballers Association asking FFV to put a program in place to adjudicate on such cases.

Credibility for these clubs is essential if they are to mount a convincing case  for a spot in division two:  they will have to show the authorities their governance procedures are up to standard and that they have the financial stability to remain competitive irrespective of on-field performance.

The quality of their facilities will also have a major bearing on how any application is received – after all, former FFA CEO David Gallop attributed the poor ''optics'' of Team 11's proposal to play matches at Casey Fields as one of the reasons for the FFA spurning their bid in favour of Western United when the last A-League expansion took place in December 2018.

South have a long-term user agreement on their ground at Albert Park while another traditionally strong club, Melbourne Knights, owns their venue at Sunshine: many believe it would have been an ideal base for struggling A-League new boys Western to have played at while they waited for their proposed stadium at Tarneit to be built.

Several players who have done well in the NPL – such as Melbourne Victory squad members Elvis Kamsoba and Kenny Athiu –  have been able to use their NPL experience as a launching pad into the A-League, while a number of Victorian NPL clubs have made the semi-finals of the FFA Cup in recent years, including South, Bentleigh Greens and Hume City.

Filopoulos says that broadcasting games on Facebook and You Tube can lift the cut-through of the competition.

''We are also trying to improve venue standards and compliance, and are working with clubs to help them run their operations better,'' he says.

One metric that authorities will be looking at to judge whether clubs merit a division-two spot will be their ability to pull crowds.

NPL attendance numbers are, not surprisingly, well below A-League totals but another measure which could be employed is viewing figures.

For the opening round of the season in mid February FFV figures say that a total of 129,000 viewers watched the games on Facebook and You Tube. The most popular was the South v Heidelberg clash, which drew 24,500, just ahead of the Oakleigh v Avondale match.

Filopoulos says the next aim is to have content shown on streaming service Kayo and Optus.