There was a part of Mathew Leckie’s teenage self in his goal that shook the world, and he hopes that there will be a part of his adult self in future Socceroos’ heroics.

Leckie was 15 the only other time the Socceroos won their way into the last 16 at a World Cup in 2006. It planted in the idea of emulating them, though he could scarcely have imagined shading them by scoring the goal that beat the 10th-ranked team in the world in a World Cup group decider.

“It’s amazing. As a young boy, you dream big,” a still somewhat dazed Leckie said after the game. “When I decided that I really want to be a footballer, you don’t really notice, but watching the Socceroos could be the reason why.

“It’s moments like this that build the game, and potentially give young kids inspiration to walk on and be a footballer one day.”

Minutes before Leckie scored, Tunisia had scored the goal that would ultimately beat France and narrow the Socceroos’ margin for error, though they didn’t know it.

“I had no idea,” Leckie said. “Arnie said in the press conference yesterday that we had no control over what happens in the other game. At the end of the day, we went out to win the game and embrace the moment – and [we] got the result.” 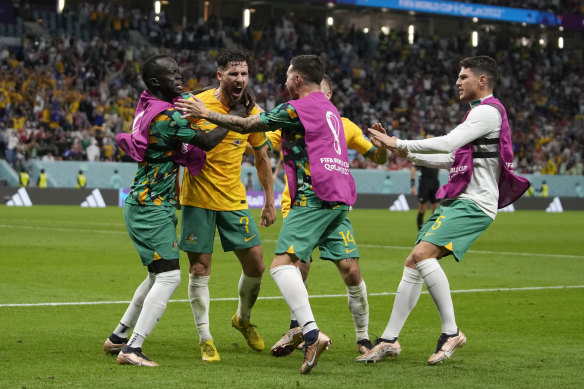 Australia’s Mathew Leckie, left, celebrates with his teammates after scoring his side’s goal during the World Cup group D match against Denmark.Credit:AP

Taking the goal, Leckie was deceptively cool. “It was a tense game,” he said. “We started off a bit slow, then we sort of came into the game. There were a lot of occasions in the first half when we won the balls, and their full-backs were fairly high, and I wasn’t able to get the ball past the defence. There was so much space.

“On this one occasion, we won the ball. First, I went to cut inside and [a Danish defender] went that way, so I just in the moment swung the left boot and then I saw the ball was rolling in.

“You saw the emotion. I didn’t know what to do, I was just pounding my chest.”

Within seconds, the entire squad was pounding him.

The goal stood to the end of the game, whereupon delirium took over. “We want to dream big,” Leckie said. “I think the key was when we came to this tournament. We always said we want get out of the group. Now we’ve done that, the first thing Arnie [coach Graham Arnold] said was, ‘Let’s go one more’.”

Leckie’s mind returned to the start of his own dream. “I think anything’s possible if you give everything, and that’s something that I always tried to do as young guy: head down and work hard,” he said.

“That’s one of the main reasons I’ve had a fairly successful career because of my determination and my fight. Hopefully, that moment today and the result inspires other kids.”