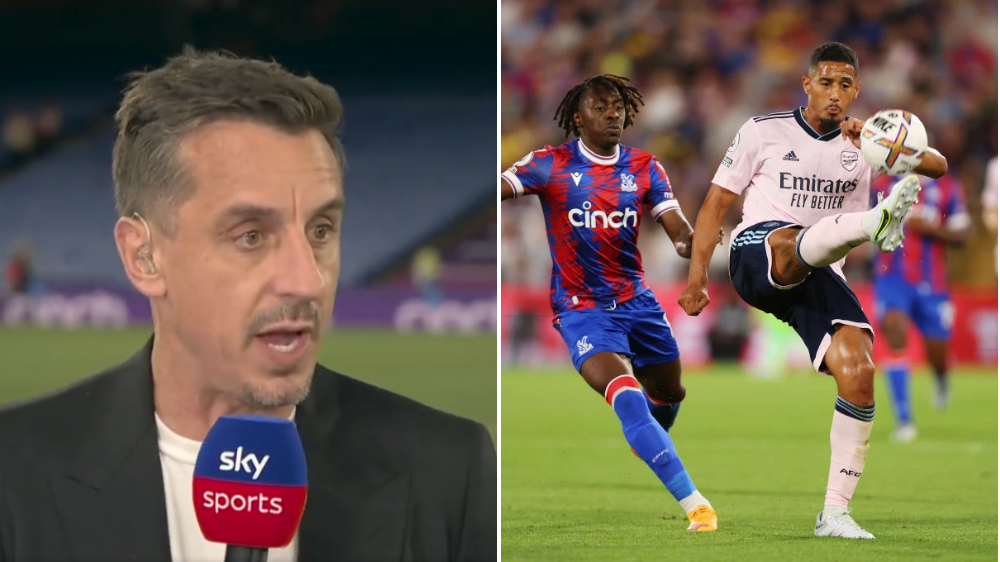 Saliba was finally handed his Gunners debut on Friday night for the Premier League opener against Crystal Palace.

Arsenal spent almost £30m to sign Saliba from Saint-Etienne in 2019 but the French defender went three years without featuring for the club.

Saliba was on loan at Marseille last season but returned to north London over the summer and impressed in pre-season to force his way into Mikel Arteta’s plans.

Making his Arsenal debut in a lively Selhurst Park may have been a daunting prospect but Saliba impressed to help the Gunners keep a clean sheet and win 2-0.

Jamie Carragher named Saliba as his Player of the Match and both he and fellow Sky Sports pundit Gary Neville heaped praise on the 21-year-old after the match.

Manchester United legend Neville said: ‘I was massively impressed with Saliba. He reminded me of a young Rio Ferdinand actually.

‘He’s such a young defender at 21. Getting through that second half, when Arsenal weren’t at their best, would have been the most pleasing thing for Mikel Arteta.

‘Crystal Palace away, that’s a tough challenge and that’s a big performance from Saliba.’

Carragher added: ‘I thought he was really good. He didn’t have much to do in the first half but there was one long ball where he just came across, the way he dealt with it… he looked the business, he looked the part.

‘At such a young age, the way he dealt with that second half… he looked the real deal.

‘Bringing him in certainly adds something because you always thought that was a weakness for Arsenal. His physicality will certainly help Arsenal in those away games.’

Saliba was delighted to make his long-awaited debut in Arsenal’s opening win and said: ‘We knew it would be hard here but we were strong and solid.

‘I’ve waited a long time to make my debut and I’m happy to start with a clean sheet and a win. It’s important for confidence.’