Sydney FC coach Steve Corica's winless run in the AFC Champions League has continued after a 2-2 draw with a 10-man Jeonbuk Hyundai Motors at Jubilee Oval on Wednesday night.

The Sky Blues looked set to break Corica's Asian duck at long last, only for Han Kyo-won to strike with a 89th-minute leveller, tapping into an empty net after Brazilian Murilo Henrique's shot cannoned off the post and came straight to him. 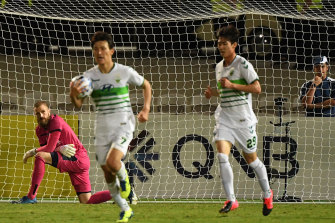 It was no less than what the K-League title-holders deserved after a questionable penalty call in the 77th minute gave Sydney the lead and saw their captain, Choi Bo-kyung, sent off, leaving them a man down for the final portion of the match.

Sydney had mounted a rapid counter-attack which exposed the last line of Jeonbuk's defence, the move ending with Adam Le Fondre laying the ball off for Rhyan Grant to shoot from point-blank range.

Choi laid down and tried to use his body to block the ball, but referee Ahmed Al-Kaf – after looking to his linesman for advice – ruled that he had used his hand or arm in the process and produced a straight red card, despite the player's own protests.

Le Fondre converted the subsequent penalty, while Jeonbuk coach Jose Morais rued the absence of the VAR, which is not in use for the ACL's group stage.

"In Asia, I don't understand why we don't invest in the same way that other leagues are investing in terms of technology that can help to make the game more fair," he said. 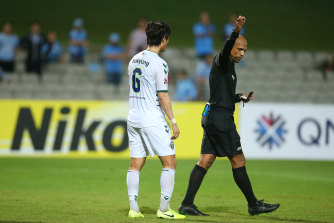 Ultimately, though, the Sky Blues could not seal the deal against a team that had not played a competitive match in three weeks, with the coronavirus outbreak in South Korea leading to the indefinite postponement of their domestic season.

Sydney FC captain Alex Wilkinson labelled his side's late capitulation as "garbage" in his flash interview on the field, and Corica agreed that they needlessly chased a third goal and, in so doing, failed to close out the game appropriately.

"We should have won that, simple as that," he said.

"We should have three points and we'd be in a better position than we are now. They had 10 men. We need to keep the ball. If we keep the ball, you don't concede a goal, it's very simple.

"He was frustrated when he said that, Wilko, but it's the truth. In these situations we just need to be better with the ball. We don't have to go and score another goal because we were winning."

Corica has now overseen eight matches in the AFC Champions League – six last season, and now two so far in this campaign – and is yet to record a single victory.

Sydney still have four matches left to play in Group H – that is, assuming they can be played in spite of the coronavirus – so, mathematically speaking, there is ample time to turn things around. But home games are seen as crucial in Asia, and this was an opportunity they shouldn't have let slip.

Earlier, Luke Brattan put the visitors in front with an own goal just five minutes after the resumption of play in the second half, sticking a foot out at a corner kick to accidentally deflect Hong Jeong-ho's near-post header past goalkeeper Andrew Redmayne.

But Sydney struck back just six minutes later when a long throw-in was badly misread by a Jeonbuk defender. That gave the fleet-footed Buhagiar room to roam, putting Choi on his back with a mazy run into the box before finishing at the near post.

The Sky Blues certainly rode their luck from there – Jeonbuk spurned two glorious chances within the space of three minutes, with Cho Guesung and Han both guilty of missing the unmissable from directly in front.

In the end, they got a deserved share of the spoils, while Sydney have again been left to rue what could have been on Asia's biggest stage.