Football Federation Australia is set to take its national second-division blueprint to the market to gauge the interest and financial capability of clubs outside the A-League – and chief executive James Johnson believes it should be "full steam ahead" if the response is strong enough.

It has been three months since FFA's steering committee for the ambitious project, led by board member and former National Soccer League boss Remo Nogarotto, was due to release firmer details on how the proposed second tier – a necessary precursor to A-League promotion and relegation – can get off the ground. 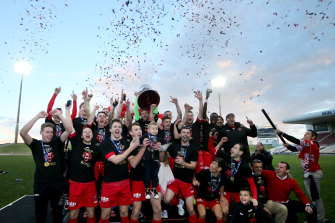 Wollongong Wolves won last year’s NPL finals series and would be among the leading contenders to participate in a national second division.Credit:Sylvia Liber

Johnson concedes some vital questions remain unanswered, including how much it will cost clubs annually to participate, and whether the competition should be played in parallel with the A-League in summer or the NPL season in winter.

But Johnson believes the next step is to "test the market", most likely through an informal EOI-style process, to further understand what sort of money interested clubs are able to spend and use that information to help complete financial modelling.

"If we can find sufficient interest, then why not do it? I am a big believer in playing more football matches at a national level, at a higher level, because I think that will help stimulate game development," Johnson told the Herald.

"I don't think five national-level competition games per week is enough – not when we're competing internationally.

"We're at the stage where we have a nice concept, the working group's done some great work, and now we have to test the market."

Johnson conceded much more "number-crunching" was needed, but an equilibrium had to be found between the positions of different stakeholders, who hold contrasting opinions on what should be required financially from clubs in a second tier.

"There's two views – obviously we need to be pragmatic and set the player costs and the running of a club at a lower level so that more matches can be played. Then there's another view which is we need to set it at a higher level because we need a higher product," he said. 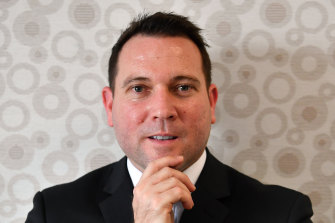 In 2017, the Association of Australian Football Clubs (AAFC) released a rough framework for a second-tier league called ‘The Championship’. It proposed an annual working budget for clubs of $2.5 million – $3 million short of what Professional Footballers Australia's projections suggest would be needed.

While the two organisations have worked closely together on the steering committee, sources close to the project told the Herald they still remain some distance apart. Key figures at FFA also remain privately sceptical about whether enough clubs will have enough money to make a second division worthwhile, sources said.

Johnson has flagged tweaks to other competitions in the event a second tier does not eventuate to provide more national-level matches, including beefing up the FFA Cup or end-of-season NPL finals series to tournaments more closely resembling a continental Champions League.

"We could quite simply change the format of the FFA Cup or NPL so we have group stages instead of knockout competitions. I think we have to explore all these different avenues," he said.

AAFC chairman Nick Galatas believes that won't be necessary, and that "more than enough" suitable candidates for a 14 or 16-team league will emerge.

"We think there's easily enough, but you never know until you know – until there's formal applications based on a formal set of criteria," Galatas told the Herald.

"That's why we're going back and honing it a little bit to fine-tune the numbers. We're working both ways, what the clubs can do and what has been identified by the steering committee to date as a good starting point, and working towards what is the best way to start."