Europa League fixtures: When are Man Utd, Rangers and Wolves playing in last 16?

The Europa League draw sets up eight matches to be played over two legs. The winning sides will progress to the quarter-finals of the competition.

Manchester United have been drawn away to Austrian outfit LASK.

In terms of the UEFA club coefficient, LASK is the lowest-ranked side left in the competition.

Fellow Premier League side Wolves will also play their first leg away from home.

They’ve been drawn against Greek side Olympiakos, who knocked out Arsenal in the last 32.

Rangers, meanwhile, have been handed a home draw against Bayer Leverkusen. 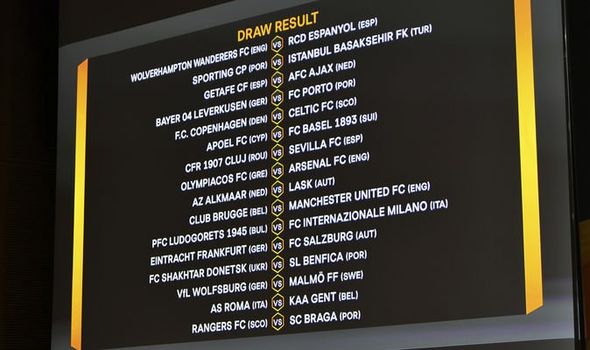 When will last 16 ties be played?

First leg matches will be played on Thursday, March 12.

The return legs will take place a week later.

Europa League fixtures kick-off at either 5.55pm GMT or 8pm.

UEFA will confirm the full schedule in due course.