Melbourne City had the goalpost to thank after holding off a frenetic fightback from Perth Glory to notch a 3-2 A-League victory at HBF Park.

But Glory came out with renewed spirit after halftime, with Joel Chianese’s 53rd-minute strike and Bruno Fornaroli’s 65th-minute effort igniting the 8107 crowd.

Perth skipper Diego Castro came close to levelling on 74 minutes, only for his curling strike to rebound off the upright.

And the crossbar saved City in the 90th minute when goalkeeper Thomas Glover got a fingertip onto Fornaroli’s strike and the ball glanced off the woodwork. Perth would have jumped to second spot with a win.

Instead, they are now fourth and six points adrift of second-placed City, albeit with a game in hand. 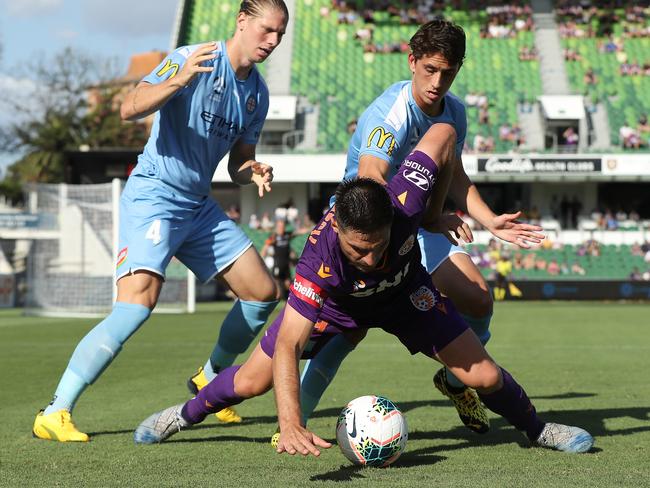 “The reaction was fantastic,” Glory coach Tony Popovic said of the fightback.

“We could have won two or three football games in the second half, but in the end we just couldn’t manage to get another goal or another couple of goals.” Glory defender Alex Grant had a goalward-bound header cleared off the line in the 15th minute, but the remainder of the half belonged to the visitors. It all started with a slice of luck in the 24th minute.

Griffiths’ attempt to latch onto a corner kick went awry when the ball bobbled through his legs with the goal beckoning.

Luckily he was able to regain his composure in time to poke home.

Berenguer doubled the lead in the 34th minute with a beautiful 21-metre curling strike that gave Glory goalkeeper Liam Reddy no chance.

A-League: Perth Glory went down 3-2 to Melbourne City in an absolute nailbiter at NIB Stadium.

Alarm bells were already ringing at that point, but Glory’s defence failed to rise to the occasion.

Reddy and his defensive unit were simply flat-footed when City captain Scott Jamieson slid a low pass across the box.

Susaeta sprinted to meet the ball at the far post for the easiest of tap-ins. Franjic’s cross was met by Fornaroli, whose header was brilliantly saved by Glover.

But Chianese was on hand to tap in the bouncing rebound with a clever flick. Fornaroli scored Glory’s second after excellent lead-up work from Castro and Chianese, but Perth were unable to find the equaliser despite unleashing wave after wave of attacks.

A-League: Rostyn Griffiths scored with a nice touch for Melbourne City, then showed off his interviewing skills with this masterful effort with the microphone.