Sydney is missing out on sharing the joy of the Socceroos’ success at the World Cup and needs to set up a live broadcast site before the next match on Sunday, former captain Craig Foster says.

Scenes of delighted Melburnians celebrating together in a packed Federation Square on Thursday morning after the Socceroos beat Denmark 1-0 left Sydneysiders feeling inadequate.

They took to Twitter to call on NSW Premier Dominic Perrottet to set up a site before Sunday’s game against Argentina, flagging the Sydney Opera House foreshore as a possible venue.

“You can’t miss this opportunity to bring a community together and unite us as a country, for 90 minutes,” Twitter user @CTrajceska wrote, tagging Perrottet and the City of Sydney council.

“C’mon @Dom_Perrottet have a @cityofsydney live site,” @Elia_Santoro wrote. “You can pull it off even in short time. This passion unites … It’s AUSTRALIA.”

Foster also took to Twitter to call on Perrottet to intervene in light of the Socceroos’ win, which has secured the team a spot in the final 16 round. 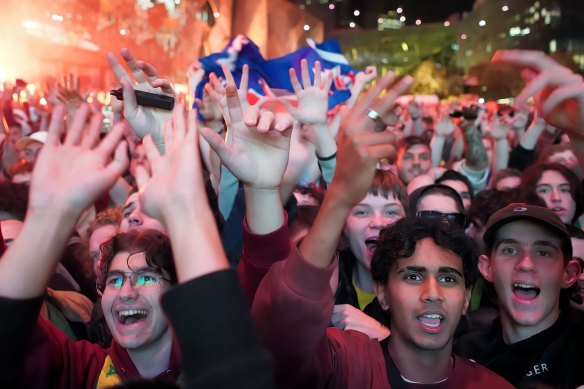 “Premiers, we need some more live sites around the country Sunday morning @Socceroos game, 6am. To celebrate an amazing achievement & quest for our 1st ever male World Cup Quarter Final,” Foster wrote, tagging Perrottet and his counterparts in South Australia, Western Australia, Queensland and Tasmania.

Meanwhile, an online petition calling for a live site has attracted more than 300 signatures.

“Why not get the game on a big screen at the Opera House forecourt and light up the sails in green and gold. If not the Opera House, Darling Harbour at a bare minimum. The Australian football team is the only team that unites our entire country. This needs to be done.”

The NSW government has extended trading hours for licensed venues showing the World Cup games, but there is no live public broadcast site, as there has been for previous World Cups.

The City of Sydney council said in a statement that it did not have the authority to set up a site on private land nor land owned by the state government.

“Therefore, we cannot approve activities within sites such as Tumbalong Park, Opera House, Royal Botanic Gardens etc,” it said, noting it had also not received any applications for live sites in its local government area.