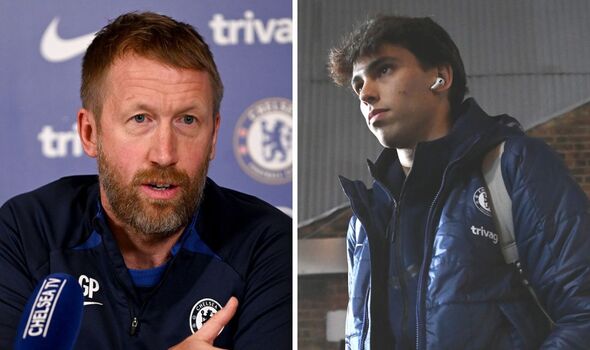 Graham Potter has explained why he felt the need to throw Joao Felix straight into the thick of things for his Chelsea debut against Fulham. Chelsea’s fourth January signing only begun training with his new team-mates on Wednesday for the first time.

The Portugal international joins on a short-term loan from Atletico Madrid with Chelsea hoping he can hit the ground running in front of goal. And Potter has wasted no time in giving Chelsea’s latest signing his debut by naming him in his starting line-up against Fulham.

Chelsea are in dreadful form heading into the match against their west London rivals having won just one of their last eight league matches. Potter felt Felix’s early introduction to the starting line-up was necessary to freshen things up and give his side a lift.

“It’s a combination of a lot of things,” he said. “His training, the quality he has, the team needs a little bit of a lift in terms of the attributes he has.

“Obviously it’s a tough one to come into, but I think he’s a confident boy. He just wants to play football and I’m looking forward to seeing him play.”

When asked what he requirements he had set for Felix, Potter joked: “Yeah, goals and assists. Just keep it simple for him.

“I think he’s just got to be himself. Hasn’t had that much time in terms of working with the players. Just be himself, express himself and enjoy the game.”

Felix arrives at Chelsea having struggled to live up to expectations in Madrid. Atletico paid an eye-watering £112million to sign Felix back in 2019 with a number of Europe’s elite clubs battling for his signature.

But he’s failed to score double-digit figures in any La Liga season so far and fell out of favous with Diego Simeone. The 23-year-old had traditionally played as a second striker in Spain, but appears set to play further forward at Chelsea.

At international level, Felix is often used out wide with Cristiano Ronaldo or Goncalo Ramos preferred through the middle.